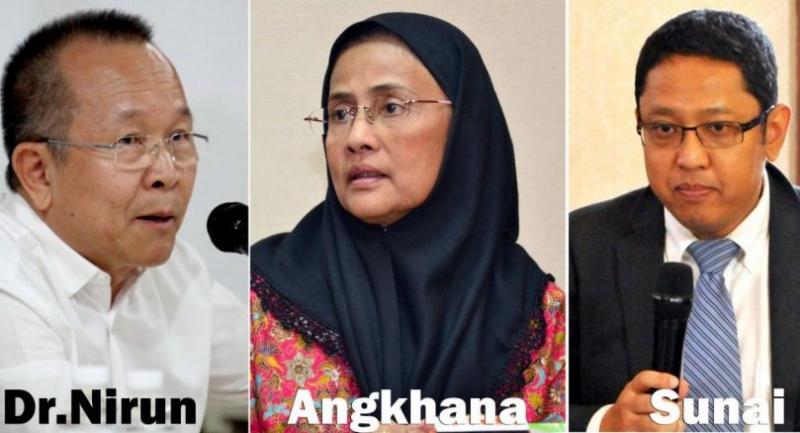 AMID the increasing decline of human rights in Thailand and international organisations taking a leading role in addressing concerns, questions have arisen about the National Human Rights Commission (NHRC)’s efforts and ability to address such problems.

The current commissioners were appointed in late 2015 under the National Council for Peace and Order (NCPO), and there are concerns on whether the agency can fulfil its role to protect people’s rights.

And with the organisation’s new regulations being written to be in line with the new constitution, critics have spoken about the role the NHRC should be playing in society.

Sunai Phasuk, a senior researcher on Thailand for Human Rights Watch Asia (HRW), said human rights in Thailand were continuously deteriorating. The ruling junta, Sunai said, showed no concrete signs of wanting to prepare the country for a transition back to democratic rule, as it had promised.

“Basic rights such as freedom of expression are highly limited,” Sunai said. “HRW has no hope that the country is going in the direction planned in the ‘road map’. What we see now is the road map to tightening the power grip of the military regime.”

Although the rights commission was set up to deal with the country’s rights issues, the advocate said the current commission functions under harsh conditions.

Sunai believes that commissioners have very little experience in the field, and this has resulted in a weak agency.

But he noted that under the rule of the NCPO, the commission can hardly express its stance on human rights

Worse still, Sunai said, was the fact that the commission could be reduced to serve as a “mouthpiece” of the current regime.

“In a recent opinion gathering of the Constitution Drafting Commission [CDC] on the organic law of the NHRC, its chairman Meechai Ruchupan said very clearly that the commission should defend [the country] against international criticism regarding rights issues,” he said. “Instead of being a mechanism in the checks and balance system and holding rights violators accountable, the NHRC has to defend the crimes.”

Sunai proposed that the new organic law should adopt a new approach to overturn the current trend.

He said the recruitment of rights commissioners had to be changed. Civil society should be included in the selection process to ensure the right people were recruited to the commission rather than people being picked by officials whose knowledge was questionable.

The commission should also have the authority to take cases to court, he said.

“After finding cases of human rights violations, the NHRC should be able to present them to prosecutors. It would make the commission a lot more influential.”

Angkhana Neelapaijit, a long-time rights fighter and a commissioner at the current NHRC, also believes the body should be able to take cases to court.

“I strongly agree that we should be able to do that,” she said. “There have been too many times when people have refrained from taking such action.

“Sometimes it’s about time and money – people just don’t want to waste it by filing a suit. Other times, people are afraid to clash with powerful people or with the state.”

Angkhana said the NHRC actually has the constitutional right to take cases to court but under the current organic law there were no clear clauses related to that.

“In the law currently in effect, there is no stipulations about who can be our lawyers or about how we should have a legal department within the commission,” Angkhana said. “So, despite the permission given [to the NHRC] by the 2007 charter, we don’t have a chance to exercise the power to take legal action on behalf of victims of a violation.”

In the current round of writing the new organic law to go with the new constitution, Angkhana said she had tried to raise this issue but most commission members did not support it and as a result it was not included in the draft law submitted to the CDC.

Nirun Pitakwatchara, a rights advocate and former commissioner at the agency, saw the matter differently. Nirun believes that the commission already has sufficient power, but the problem lies in practical application of that power and in a lack of awareness.

“According to the 1997 and 2007 charters, the commission has three main roles, which are scrutinising, reporting to authorities, and taking legal action,” Nirun said. “But |the failure comes because other organisations don’t understand our role and sometimes do not give us cooperation.”

Nirun also noted that the country has a national human rights plan that all government organisations are bound to. However, he said that very few people were aware of this plan and often people and state organisations neglected to take into consideration human rights when doing their job.

“So, everything comes down to poor implementation of the plan,” he said.

“We have plans, but then people do not follow them. So, the primary problem we have is people do not |get the rule of law and so sometimes enforce laws without consideration of human rights principles.”

- Human rights remain a pressing issue in Thailand and has been deteriorating since the 2014 coup as violations, especially against freedom of expression, is rampant.

- The National Human Rights Commission (NHRC) needs improvement in some area to ensure its ability to fulfil its task in protecting people’s rights.

- The commission should be made up of those who truly are experienced in the field.

- The commission should be able to exercise its power to take legal action against those violating human rights on behalf of the victims.

- The failure of the NHRC also lies in the poor understanding of human rights principles among the government and governmental organisations.