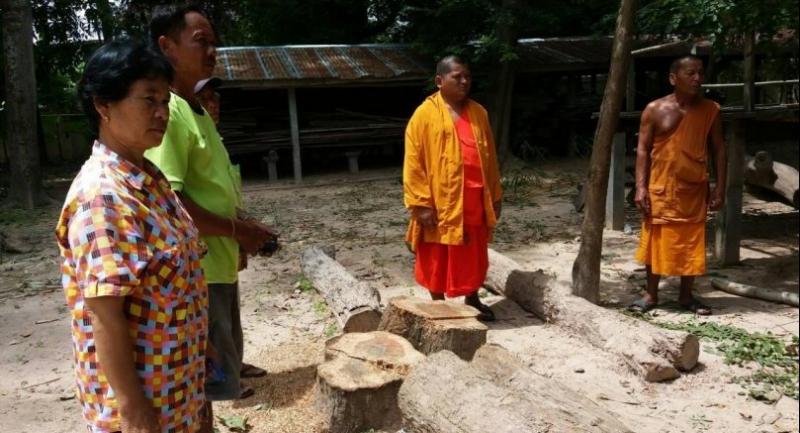 Buddhist monks rang their temple bells early Saturday to rally villagers to help protect two Siamese rosewood trees in the temple’s compound in Maha Sarakham – but it was too late, as thieves had cut the both down.

Three monks living at Wat Ban Makham on Tambon Kaedam in Maha Sarakham’s Kae Dam district rang the bells at 3am when they heard thieves cutting trees in the temple grounds.
When some 30 villagers came to the temple, the two trees had been felled with a chainsaw. The thieves had managed to cut one of the trees into logs and fled the scene with the logs.
The temple abbot, Phra Anuwat Promchato, said an unknown number of thieves arrived in a pick-up truck and a car, and started cutting down the trees. The abbot said the trees were about 50 metres away from the monks’ living quarters.
When the monks heard chainsaw noises, they came out to see spotlights focussed on the trees. When the monks rang the bells, the thieves pointed their spotlights on to the monks, prompting them to run for cover for fear of being shot.
Narong Anu-an, an assistant village head, said when he arrived at the temple with other villagers, the thieves had fled with wood from one of the trees.
Narong said the villagers wanted forestry officials to remove the remaining logs from the temple as soon as possible. Otherwise, the officials should issue permission for the monks to use it for restoring parts of the temple.