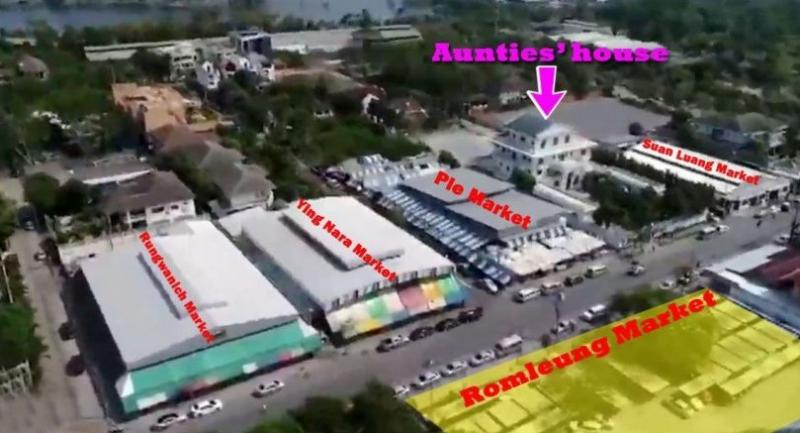 The three markets are: Suan Luang, Rungwanitch and Romleung, which are operating without permits.

The order was issued after Bangkok Governor Aswin Kwanmuang visited the area to find an acceptable solution to the decade-long dispute between residents and the BMA over the presence of five markets in the area.

He also ordered temporary closure of the Ple and Ying Nara markets.

He would set up a panel within a week comprising all parties in the conflict to find a solution, which is expected by next Wednesday.

The area has been the scene of a series of conflicts but came to national attention in recent days when the residents of one house were filmed attacking the pickup truck of a woman who had parked in front of their gate. The video went viral.

The residents have accused the BMA of negligence by allowing markets in a residential area.

The upper-class families in the housing estate say the markets have caused chaos, ranging from water and air pollution to hygiene problems. They say the quiet atmosphere has become very noisy, particularly during the weekends.

Prawet district director Thanasit Metpunmuang had said on Tuesday that the project is not reserved as a residential area, so businesses are allowed.

However, in the presence of Thanasit, Aswin told reporters yesterday that of the five markets operating in the area of the Seri Villa project, three were operating illegally.

Suan Luang Market has a permit to construct market buildings but has no permit to operate as a market while Rungwanitch and Romleung markets do not have permits.

Ple and Ying Nara markets have commercially-related permits but the type of goods they can sell is to be considered. Aswin said “the markets that did not follow the order to suspend their businesses will be fined Bt5,000 per day. The examination of the legitimacy of the markets will be expanded to about 300 markets in the capital. I was not aware of the existence of this problem.”

Many market visitors park their cars along the roads rather than in allocated parking spaces where they have to pay fees. Many of the cars have been parked in front of house gates, blocking residents from leaving their own homes.

Members of the Sangyoktrakarn family took the dispute to the Supreme Administrative Court, accusing the BMA and officials of permitting markets to operate on land set aside for residential use. The case is still being considered by the court, but it has issued an injunction for the BMA to make sure that the presence of the markets caused no trouble to the family, pending the Court’s determination whether the markets were legally allowed.

The family claimed that, despite the injunction, market after market had been erected in the area.

A police source revealed that police have taken the problem seriously and have booked more than 200 vehicles that broke traffic rules in the area from February 1-19.

The dispute was well publicised on Sunday after a woman parked her pickup in front of the Sangyoktrakarn family’s house and went shopping.

Two sisters from the family, Boonsri and Ratanachat, were about to go out but could not because the pickup blocked the gate. They said they tried all means to find the car owner for an hour, including blowing a car horn to locate the woman.

Becoming furious, they hit the pickup with axe and spade. The woman filed a complaint with police and the sisters are now facing a charge of property damage.

The sisters held a press briefing in front of their house, saying that had suffered from this problem for more than 10 years because of the presence of the markets. Many social network users threw their weight behind the family.