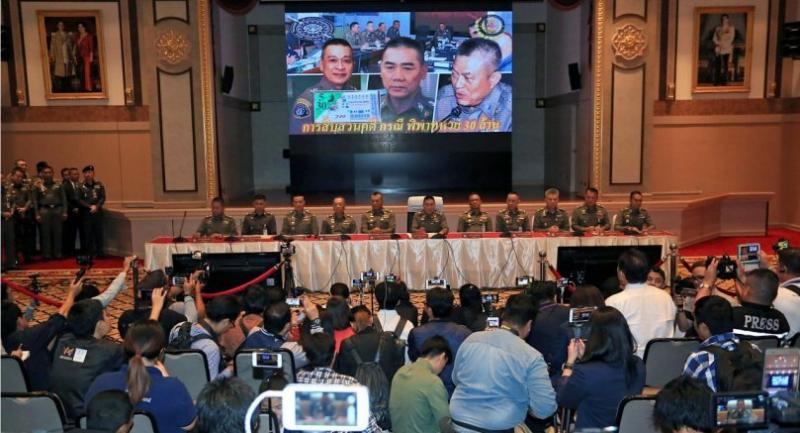 The national police chief on Wednesday declined to reveal the real owner of lottery tickets worth Bt30 million at the centre of a dispute between a schoolteacher and retired police officer, saying he could not violate court jurisdiction.

The national police chief on Wednesday declined to reveal the real owner of lottery tickets worth Bt30 million at the centre of a dispute between a schoolteacher and retired police officer, saying he could not violate court jurisdiction.

However, Pol General Chakthip Chaijinda told a packed press conference that a Supreme Court ruling had determined that ownership rights belonged to the individual who had cashed in the tickets.

Ownership of the tickets has been contested by teacher Preecha Kraikruan and former police officer Charoon Wimool, who both claimed to have bought the tickets.

Chakthip’s statement appeared to refer to Charoon as the legitimate owner, since he had cashed in the tickets and collected the money in November.

The scandal began after Preecha filed a complaint with Kanchanaburi police claiming that he had lost the tickets, which he had bought from a vendor in a Kanchanaburi market. The complaint was lodged two days after the announcement of the winning number.

He did not name Charoon at the time, but a police investigation found that the retired officer had already cashed in the tickets and spent about Bt5 million of the prize money. The remainder of the funds is frozen pending the conclusion of the investigation.

Preecha subsequently filed charges against Charoon alleging receipt of stolen items, while Charoon in turn filed a charge claiming that Preecha had given false information when he claimed that the former officer had picked up the winning tickets from the street.

Charoon claimed he had bought the tickets from a vendor, whom he could not remember.

Preecha and a ticket vendor testifying on his behalf were later arrested for filing false information damaging Charoon.

Speaking at the same press conference, Central Investigation Bureau commander Pol LtGeneral Thitirat Nongharnpitak said the retired police officer did not have any witnesses to confirm his purchase of the tickets, while the teacher had about 40.

However, the witness testimonials were contradicted by scientific evidence that CIB police gathered during their investigation, Thitirat said.

The CIB took over the investigation from Kanchanaburi police, who had concluded that the tickets belonged to Preecha, after Charoon sought help from the bureau, claiming he had been treated unfairly.

Chakthip said the arrest of Preecha and the vendor was just the beginning as the investigation was not over and more arrest warrants were expected.