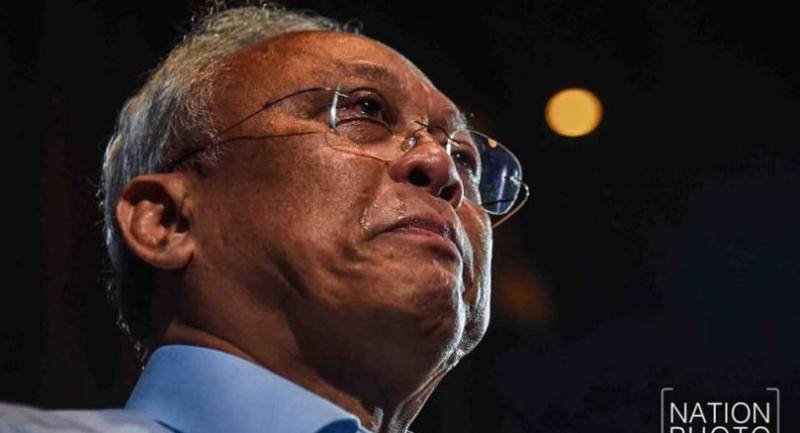 Amid tears, he joins action coalition party; says clamour of masses forced him to change his mind

VETERAN politician Suthep Thaugsuban, whose street protests against the Yingluck Shinawatra government paved the way for the 2014 coup, yesterday did a dramatic U-turn, breaking his famous vow to never return to politics.

The former deputy premier agreed to join the proposed Action Coalition of Thailand (ACT) Party, which has applied for registration with the Election Commission (EC).

Sobbing as he spoke, Suthep explained that he could not turn down the entreaties of the masses, referring to the supporters of his former People’s Democratic Reform Committee (PDRC), for him to join the party.

“I think of the thousands who were injured and hundreds who sacrificed their lives for the country,” Suthep said, after crying for nearly a minute. “I wish those people would get to see what we are doing today, when we vow to continue to work for their cause.”

“This is not Suthep’s party. I am not the backbone of this party but I will stand by people who share the same ideology. I won’t care for any criticism because I’m not going to contest the elections,” he continued. “I have volunteered to be a servant of the people.” Suthep will head the party’s working group on campaigns to encourage public engagement with the party. He was accepted after a “unanimous” raising of hands during the party’s debut meeting yesterday at Rangsit University.

The party followed the same procedure to endorse the leaders of three other working groups. There was no counting of hands.

The 68-year-old Suthep had quit the Democrat Party and vowed to never return to politics during the PDRC’s protests in Bangkok in 2013-14 to oust the Yingluck government with a relentless campaign against “bad capitalists”.

The prolonged PDRC protests proved to be the catalyst for the 2014 coup, as the military expressed the need to restore stability.

Suthep is known to be a supporter of junta leader PM General Prayut Chan-o-cha. During the 2016 referendum campaign on the new Constitution, he even made weekly online appearances to back the junta-written charter draft as “the best reforming constitution”.

The ACT are yet to express their stance on whether they would support a role for Prayut or the military in future politics.

“We will have to ask our members in the future about that,” said ACT spokesperson Pol Lt-Colonel Jemdet Trimek. “We’re democratic. That answer will need to be based on consensus from our people.”

Under the junta’s order and the political party bill, new parties need to be registered by the EC before they can enrol additional members apart from the founders.

The ACT, via Suthep’s lawyer, merely requested registration as a party on May 25. They still need to hold their first meeting to select board executives and set up regulations before seeking full recognition as a party.

The ACT meeting yesterday, attended by hundreds of people, was also aimed at seeking founding members who are required to pay the seed capital of Bt50,000 each. They expect at least 500 founding members.

Speakers took turns to curtsy in front of the image of HM King Maha Vajiralongkorn before starting their speeches about how fortunate they felt to be a Thai under constitutional monarchy.

The relatively high enrolment fee was aimed at helping the party be self-sustainable, without having to rely on influential financiers, they said. “We encourage good people to join this party, which will be fully owned by the people and not any bad capitalists,” said the party’s co-founder, Anek Laothamatas.

Once a noted political scholar, Anek was appointed by the junta to oversee the reform and reconciliation agenda before he resigned from those positions to join this party.

Others who have joined the party are: Suthep’s son Tan Thuagsuban; the former chief of the Bank of Thailand, MR Chatumongol Sonakul; and former People’s Alliance for Democracy spokeperson Suriyasai Katasila.