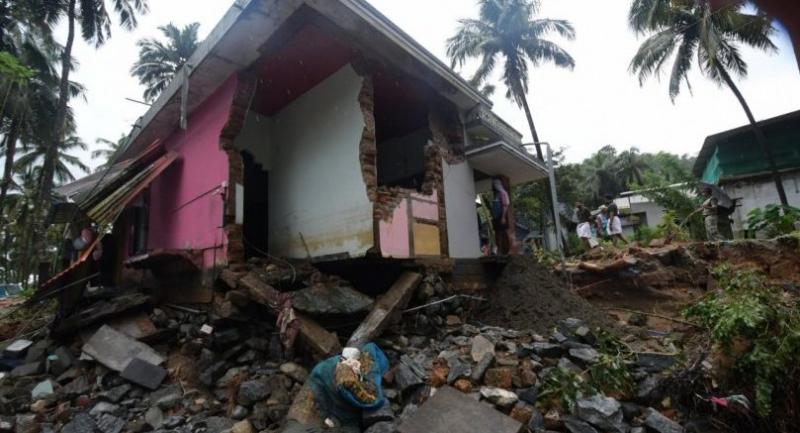 Local residents look at a partially destroyed house after heavy monsoon rains led to a landslide in Kannappankund, in the Indian state of Kerala on August 11, 2018./AFP

Flash floods in Kerala have killed 37 people and displaced around 36,000, Indian officials said Saturday, after heavy monsoons led to landslides and overflowing reservoirs across the southern state.

Kerala, famed for its pristine palm-lined beaches and tea plantations, is battered by the monsoon every year but the rains have been particularly severe this season.

Those forced from their homes "have moved to 350 relief camps across the state", an official at the Kerala State Disaster Management control room told AFP.

The army has been roped in for rescue efforts in Kerala after two days of heavy rain drove authorities to open the shutters of 27 reservoirs to drain out the excess water.

One of the five shutters of a large reservoir in the mountainous Idukki district was opened for the first time in 26 years.

"Our state is in the midst of an unprecedented flood havoc," Kerala Chief Minister Pinarayi Vijayan wrote in a statement posted on Twitter.

"The calamity has caused immeasurable misery and devastation. Many lives were lost. Hundreds of homes were totally destroyed," he added, lauding the efforts of rescue teams working in the state from across India.

The US embassy Thursday advised its citizens to avoid the areas affected and monitor local media for weather updates.

The government of Kerala, which has a population of 33 million people, has imposed a ban on the movement of lorries and tourist vehicles in Idukki.