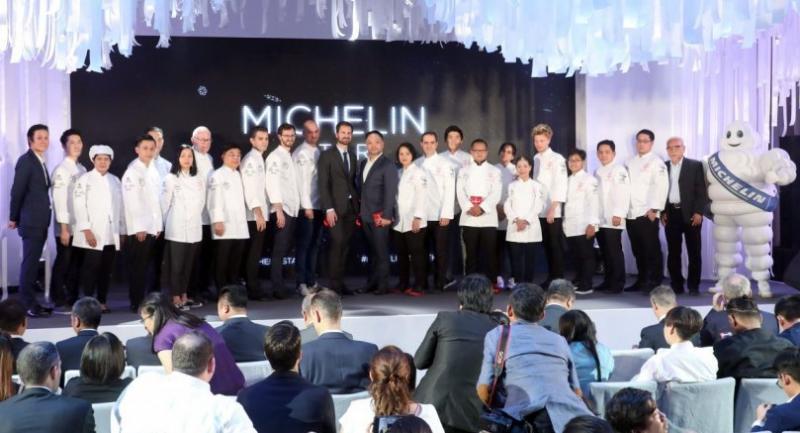 JAY FAI’S shop-house restaurant has retained its Michelin star, remaining the only street venue in Thailand to earn this internationally recognised kudos. Meanwhile, the 60-year-old restaurant Methavalai Sorndaeng, which is next to Democracy Monument and popular among politicians, is one of the 10 new eateries awarded one star, as per the second edition of the “Michelin Guide Bangkok” released yesterday at Park Hyatt Bangkok.

No restaurant in Thailand has won the coveted three stars yet, though all three two-starred restaurants from the inaugural edition, namely Gaggan, Le Normandie and Mezzaluna have retained their stars. “It’s my greatest honour to win the award again and it also proves that we can still maintain Michelin standards,” said 72-year-old Supinya Junsuta, better known as Jay Fai. Her eatery is known for local seafood delicacies, such as omelette stuffed with crabmeat, with prices ranging from Bt800 to Bt2,000.

“For the past year, after winning one star, I have not stopped cooking as people are still queuing up to try the dishes. I still cook with a charcoal oven and am the only cook. I work 11 hours a day, from 2pm until 1am every day except Sunday and Monday,” Supinya said.

The little red guide has been extended to cover the best dining venues in the southern provinces of Phuket and Phang Nga for its 2019 edition. “More than half of the awards go to Thai-style cuisine, which is why Thailand has become a world-class culinary destination. We have also seen a trend in degustation menu, whereby chefs design a complete experience for diners.”

“I didn’t expect to win a Michelin star because the standard is very high. I’m really glad that Thai food can be accepted so widely,” Jirawut Sapkiree, the second-generation owner of Methavalai Sorndaeng, said.

“Our restaurant focuses mainly on local ingredients, spices and herbs and maintains the authentic recipe. The most popular dish for local people is green curry, while pomelo salad impresses foreign diners.”

Former prime ministers such as General Prem Tinsulanonda, Anand Panyarachun and Chuan Leekpai have been seen dining at Methavalai Sorndaeng.

The “Bib Gourmand” award, a rating that recognises restaurants offering exceptionally good food at moderate prices (within Bt1,000 in Thailand’s case), doubled in number this year from 35 to 72 venues. Dining venues in Bangkok’s neighbouring provinces of Nonthaburi, Pathum Thani, Nakhon Pathom, Samut Sakhon and Samut Prakan as well as Phuket and Phang Nga were covered in this category. Among them are the legendary Southern food restaurant Raya and its sister restaurant Chomchan in Phuket, along with Krua Bai Toey and Nai Mueng in Phang Nga. The Michelin Guide Bangkok has a five-year budget of Bt140 million paid for by the Tourism Authority of Thailand (TAT). The guide is expected to promote the country as an international gastronomic destination.

“The first edition had a successful impact as more tourists want to discover the diversity of Thai cuisine,” TAT governor Yuthasak Supasorn said. “Popular tourist destinations, Phuket and Phang Nga are also included in the new edition. The cuisine in Phuket is distinctive and flavourful, with a wonderful blend of influences from India, Malaysia, China and the Peranakan ethnic group, while Phang Nga is full of eateries with authentic southern fare incorporating seafood, herbs and spices.

“We plan to cover more territories in the future,” he added.