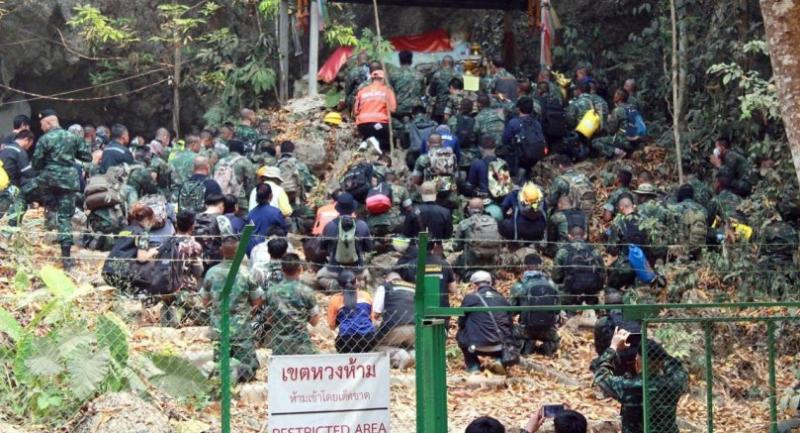 Thai Navy SEALs on Monday re-entered the Tham Luang Cave complex – which had captured the international limelight last year during one of the world’s most intriguing and tense life-saving operations – to retrieve equipment used in the rescue operation. The first round of equipment retrieval runs through Wednesday, making the cave off-limits to tourists during the three-day period.

Most of rescue equipment was left behind last year as the floodwater level inside the cave complex in Chiang Rai province rose dangerously after the last of the 13 Wild Boars – members of the local Moo Pa football academy and their coach – was evacuated on July 10. The rescue operation to save the Wild Boars, who had been trapped inside the treacherously flooded cave, took several weeks and was successfully accomplished against the odds with a great deal of international help and expertise.

Many foreign cave divers pitched in to save the stranded victims, most of them aged between 11 and 16, after their reported disappearance in the Tham Luang complex following heavy rains made international headlines. During the rescue efforts, Samarn Kunan – a former Navy SEAL – lost his life, reflecting the dangerous circumstances inside the cave. The first two halls from Tham Luang Cave’s only entrance were dry as the operation began, but a more distant section of the cave remained flooded.

Estimates suggest that there are still some 300 oxygen tanks, and many pumps, air pipes, electric wires, ropes and field beds left inside the cave.

Authorities decided to retrieve the equipment now, in the belief that the cave complex must be dry during the dry season. Although Tham Luang Cave is temporarily closed to tourists during the retrieval operation, people are still welcome to visit the Emerald Pond inside the park, officials said.

As the cave is now world-famous, it has become quite a popular attraction for both domestic and foreign visitors.