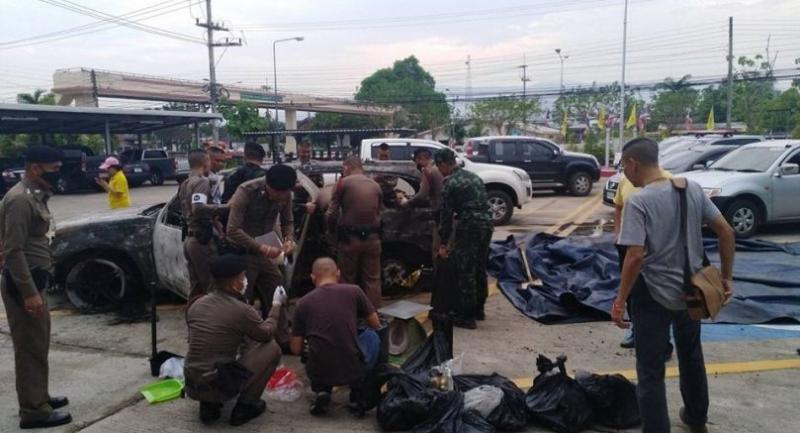 Police have launched a manhunt for an elusive 24-year-old drug suspect, who set alight an Isuzu MU-7 SUV along with a large haul of narcotics on the side of Paholyothin Highway in Lampang’s Sop Prap district and fled a police chase on Tuesday afternoon.

Acting Lampang police chief Pol Maj-General Weerachon Boonthawee said they believe the fugitive – Suphan Buri native Pornthep Chimma – is continuing to lay low in Sop Prap or adjacent areas and has not yet left Lampang. Police have handed out the man’s photo to village headmen and asked them to stay alert and contact police around the clock.

In an effort to locate Pornthep and other accomplices, police have intensely interrogated the three suspects arrested at the time of the incident. Those arrested were all in their 20s, and include Pornthep’s girlfriend, who was with him in the SUV but failed to outrun the officers.

Police declined to give the names of those in custody as it could compromise the ongoing investigation and manhunt.

As part of the investigation, police towed the burned vehicle to Sop Prap Police Station and in the ashes inside the SUV retrieved what appeared to be 497 kilograms of methamphetamine pills, 14 kilograms of “ice” (crystal meth) and one kilogram of heroin.

Police probe found that the seven people in three vehicles – a pick-up truck and a sedan to lead the way and the Isuzu MU-7 to carry the drugs – were travelling from Chiang Rai and heading to Central Thailand when they ran into a police checkpoint in Mae Phrik district of Lampang.

The Isuzu MU-7 broke away at the checkpoint, prompting police to give chase and shoot a tire. Police later reached a roadside spot in Sop Parp district and found the Isuzu on fire while the suspects were fleeing on foot into roadside forest.

Police later captured Pornthep’s girlfriend, while another team apprehended two persons – one male and one female – in the leading pick-up truck.