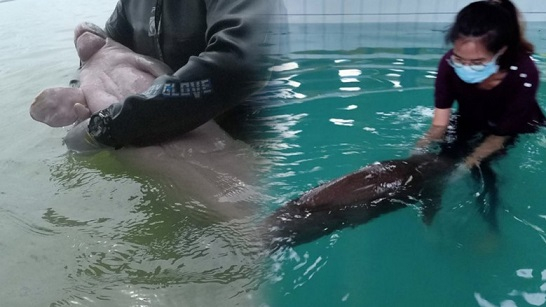 The former head of Trang's Hat Chao Mai National Park, Manoj Wongsureerat, on Wednesday proposed that a joint committee of representatives from the three southern provinces of Trang, Krabi and Satun and related agencies be set up to study the existing sea grass fields and together tackle the issue of dugongs being swept ashore and dying.

Manoj said that marine experts could also be brought in to help the joint committee set clear guidelines for management based on scientific principles.
He pointed out that raising dugong pup Yameel - which was rescued from a Krabi beach early this month - must be done in a natural environment.
Manoj also said it was time to form a team to search for a dugong herd to raise the dugong pup Mariam, which was rescued in Krabi on April 29 after she beached. The pup has since become an internet sensation and the new face of sea conservation.
Manoj led a research project which attached GPS tracking devices to dugongs for 60 days in 2016 and 2017 to survey the animals’ behaviour, habitat and feeding grounds so authorities could use the information to designate a protected zone for their habitat and food sources. The project led to systematic conservation and a protected zone being established in Trang where fishermen were told to not use certain fishing equipment that can harm dugongs and where local communities and state agencies participated in protecting the mammals and sea grass fields.
Among the three southern provinces with dugongs, Trang has the largest herd of 150-180 dugongs in Hat Chao Mai National Park, Koh Mook and Koh Libong, Smaller numbers live around Satun’s Ridi and Petra islands as well as Krabi’s Koh Pu, Koh Jam and Koh Sriboya. Manoj said Trang was the good model for dugong conservation, with the participation of state agencies and local communities resulting in the decline of dugong deaths and an increase in the dugong survival rate.
Recent incidents that saw dugong pups being swept ashore in Krabi and some like Mariam and Yameel being saved while others died, suggest that a study must be conducted into the deaths and the food sources for better area management in Krabi if Trang's success is to be replicated.
A joint committee of Trang, Krabi and Satun should be set up under the leadership of the three provincial governors and include representatives of the Department of Marine and Coastal Resources and the Department of National Park, Wildlife and Plant Conservation, as well as marine experts to study sea grass fields so as to protect dugongs, he said. The information must also be revealed for joint discussion so each province is aware of the problems and comes up with possible solutions and measures - possibly involving control over fishing tool usage, over fishing periods, and the introducing routes for tour boat navigation.