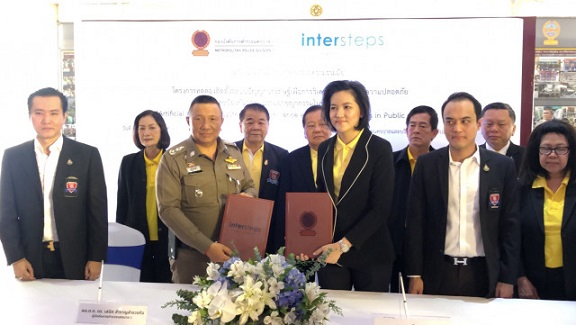 Bangkok police have joined with the private sector to pilot a public surveillance system powered by artificial intelligence (AI).

The AI System for Surveillance and Criminal Analysis in Public will be trialled in the east Bangkok district of Huai Kwang, Metropolitan Police Division 1 commander Maj-General Senit Samrarnsamruajkit said on Thursday.

Welcoming the new technology as part of efforts to maintain law and order, Senit said that if the trial proved successful in meeting police objectives and benefiting the public, he would propose extending the AI surveillance to other police jurisdictions in the capital.

The senior officer was speaking at a press conference following the signing of a Memorandum of Understanding on implementing the pilot project. Alongside him were Huai Kwang Superintendent Pol Col Phuris Jintranan, Intersteps Co Ltd executive Baralee Chutima and head of the Bangkok Committee Overseeing Police Administration Pirawat Suraset.

Phuris explained his precinct had for the past four months been working with Intersteps to link the AI system to police radio. “The system is very effective in detecting targets and helpful in checking suspects' photos against those in arrest warrants," he said.

The Huai Kwang superintendent said his jurisdiction included the Ratchadapisek Road area where the Chinese Embassy is reportedly keen to promote development of a second Chinatown. The AI surveillance system should boost crime detection, response and investigation in the area once it had become more stable with a larger database, Phuris added.

Intersteps executive Baralee said the new AI surveillance was a key foundation for the development of a “smart city”, and would increase public safety as well as boost confidence among business operators and investors in the area.

The pilot project will link with security cameras at crime hotspots under Huai Kwang police jurisdiction. Its facial recognition function will compare faces against photos in a database of arrest warrants, while its behaviour analysis aims to prevent crimes such as bag-snatching or brawling, or even help locate missing children or senior citizens, said Baralee. The equipment had already undergone a trial run over the past four months, but after the MoU signing Intersteps would begin training police officers in its various uses. The system would become more effective over time as it was exposed to real-life crime scenarios and investigation, she said, expressing hope that it would ease police workloads and help prevent crime.