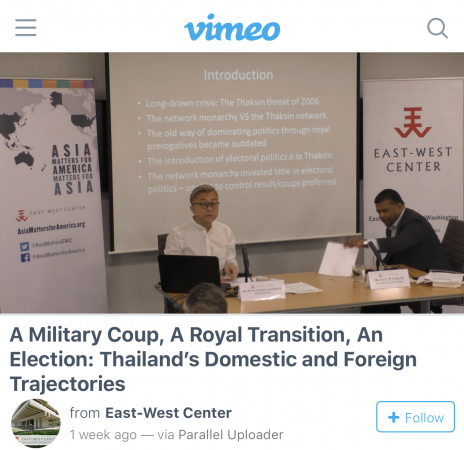 Japanese police have not reached any conclusions yet on who was behind the attack on a prominent Thai dissident exiled in Japan, a diplomatic source in Bangkok said.

The police are still investigating the incident, a Japanese diplomatic source told a small group of Thai reporters about the attack on Pavin Chachavalpongpun, a 48-year-old Thai associate professor at Kyoto University.

Last week, Pavin told the audience at the East-West Centre forum in Washington DC about the attack on July 8.

Over the past few days, international news agencies like Washington Post, Financial Times and Reuters have reported on the attack.

Pavin, a critic of the country’s military, who lives in exile said he was attacked in his home in Japan last month and believes Thai authorities were behind the attack, Reuters reported.

Pavin said he was asleep with his partner when a man broke into their home last month at about 4am and sprayed the couple with a substance that burned their skin.

Neither was seriously hurt, but Pavin said they have been told by police not to return home, Reuters quoted him as saying.

“The attacker clearly wanted to intimidate,” said Pavin, adding that he had no personal disputes that could have motivated the attack.

“The doctor said the chemical was not deadly, but the burning sensation would stay for quite some time,” Reuters quoted him as saying.

Pavin’s accusation was rejected by Thailand’s Army chief General Apirat Kongsompong, who is also head of HM the King’s Royal Guard Force, according to Reuters.

Apirat told Reuters that he had heard about the attack, but was astonished at the suggestion that the military could be involved.

Pavin, known as a prominent political dissident, has denounced the Thai military’s coups in 2006 and 2014. He has also openly criticised the monarch, Reuters reported.