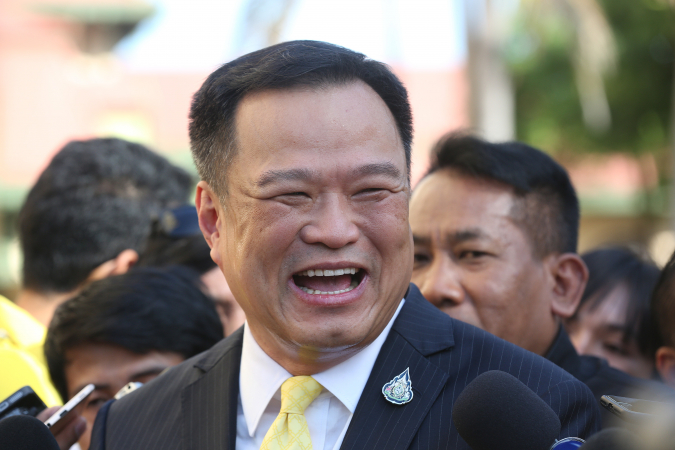 Deputy Prime Minister and Public Health Minister Anutin Charnvirakul has floated the idea of allowing patients to get prescriptions for over-the-counter medications from hospitals to take to be filled at pharmacies, while allowing hospitals to maintain their lock on dispensing “specialised” medications.

That approach would help to solve the crowded conditions at hospitals and make it convenient for patients by cutting the waiting time at the hospital, while also boosting the distribution of income among entrepreneurs, Anutin told reporters after presiding over the National Health Security Office (NHSO) board meeting on Monday.

"The waiting queue for medical services should not be more than one hour. After meeting a doctor for about 20 minutes, a patient could take the prescription paper to buy medicines from a pharmacy, so they won't need to wait too long to collect medicine at the hospital's pharmacy department,” he said.

“The NHSO could allocate the budget to hospitals, which could then wire the money to pharmacies," the minister said, noting that some 20,000 pharmacies of good quality had registered with the Food and Drug Administration and could participate. Anutin said that some areas had already implemented similar pilots and they had reportedly proven useful in cutting down the waiting time to collect medication.

NHSO chief Sakchai Kanchanawattana said that such a system had been implemented at 36 locations in Bangkok, with the interested pharmacies registering with the NHSO as “Ranya Chumchon Ob-oon" (translated as “warm community pharmacies”) and contracting to dispense medicine. NHSO would also check to ensure the applying pharmacists were up to a professional standard and were on-site throughout each day.

The pilot had been running for four months and was now being evaluated, Sakchai said. Using local pharmacies could help with dispensing medication for chronic ailments such as diabetes and high blood pressure. Sakchai said the idea of patients bringing prescription papers to buy medicines at pharmacies was realistic, as the drugs would be prescribed by a doctor and would be dispensed by a pharmacist.

As well as addressing prescriptions for medication, the minister said two other policies were in the pipeline. Within a year, emergency wards at provincial hospitals would be overhauled to boost their effectiveness and elevate the standard of emergency medicine services, Anutin said.

Another policy would see people's heath information accessible to other related agencies, so as to pre-emptively take care of people's health. The current system treats sickness rather than prevents it, with people entitled to free treatments under the NHSO. Networked technologies could be used to maximise health promotion, said Anutin.

Anutin said that a working team for development of medical treatment for rare diseases has been set up under the NHSO’s sub-panel for healthcare service types and coverage. It is led by Siriraj Hospital deputy director Dr Cherdchai Nopmaneejumruslers. Such "rare" (fewer than 10,000 patients) and "ultra-rare" (fewer than 1,000 patients) diseases often require high technologies and expertise in medical screening, diagnosis and treatments, and often lead to very severe conditions with accompanying high medical costs that affect both patients and their families.

The working team recommended that the NHSO join with the Public Health Ministry and the University Hospital Network (UHOSNET) and related specialised royal colleges as well as related agencies. Together, they could develop a healthcare service system focused on such rare diseases. That would include establishing service units, medical staff, medicine and supply lists, as well as handling medicine price negotiation and procurement and creating a national database on rare diseases.

The NHSO would allocate, on the basis of sustainability, fairness and effectiveness, a specific budget to cover the care of rare disease patients so as to prevent impacts of its other works. Meanwhile, the Health Systems Research Institute has been assigned to study possible channels to get funds for the care of patients with rare diseases, the minister said.