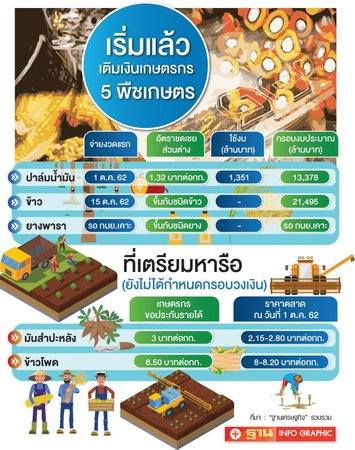 The government has started the transfers of guaranteed income into farmers' accounts via the Bank for Agriculture and Agricultural Co-operatives, at the rate of Bt1.32 per kilogram or Bt497.49 per rai, but not exceeding 25 rai in total farming area per household. It handed out a maximum of Bt11,987.25 per farmer in the first installment on October 1. In total, the transfers will amount to Bt1,351 million.

Atirat Damdee, a member of the Board of the National Oil Palm Policy Committee (MPC), said that the guaranteed income for palm oil framers will be paid every 45 days.

The government had previously set the price at Bt1 per kilogram. It has since gone up to Bt1.32 per kilogram after the Electricity Generating Authority of Thailand (EGAT) to buy fresh palm oil (CPO) as fuel for electricity production, it is lower than the expectation.

Thirachat Saekrathok, Acting President of Cassava Farmer Association in Nakhon Ratchasima said Boonjong Wongtrairat, a member of the Palang Pracharath Party, will help submit a letter to Prime Minister Prayut Chan-o-cha, to ensure that they would be paid Bt3 per kilogram, starting in November.

The average price of fresh cassava, sold by farmers, is Bt2.20 per kilogram (25% flour).

Wichian Kititasan Sorachai, Adviser to Petchaboon corn farmer in Petchaboon, Phetchabun, said that corn price has now fallen to Bt8 per kilogram, from the average of Bt9/kilogram. Farmers have agreed to sell at no less than Bt8.50 per kilogram, as proposed to the Commerce Commission (KMC), the House of Representatives last week.