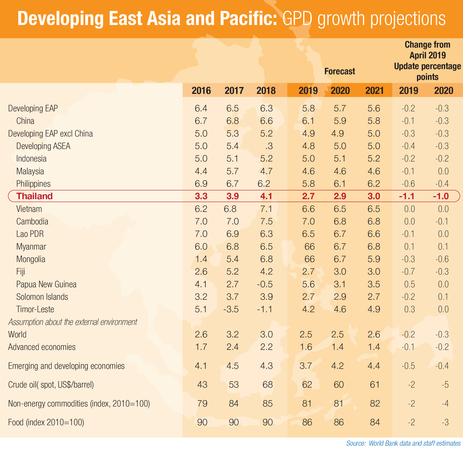 The World Bank has reduced its forecast for Thailand’s economic expansion in 2019 from 3.5 to 2.7 per cent, while 2020 speculation was also brought down to 2.9 per cent from the earlier figure of 3.9 per cent.

The World Bank had predicted in April that Thai economy would this year expand 3.8 per cent, later in July it revised down its forecast to 3.5 per cent.

Kiatipong said the factors behind the Bank’s forecast adjustment included the decline in the export and service sectors, which have gone down by 5.3 and 2.5 per cent respectively. “Furthermore, in 2019 Thailand has undergone one of the worst droughts in this decade,” he said. “The government has allocated a relatively low public investment budget, while the economic stimulus measures implemented since August have yet to yield significant contributions to the 2019 economic expansion.”

“However, Thailand is still facing several risks and challenges, not least uncertainty about the government’s stability and unity coming from coalition of 19 political parties, which will affect investors’ confidence in the government’s long-term projects,” he added. “Moreover, domestic demand tends to slow down due to delays in many EEC projects.”

Meanwhile, the rising tension in the US and China trade dispute has served to weaken Thailand’s export sector even further as well as lower private investment in export-focused industries. “To make things worse, the Thai Baht has become strongest in the region this year as foreign investors have sought shelter in the Thai bond market, posing a substantial obstacle to the expansion of export and tourism industries,” he said.