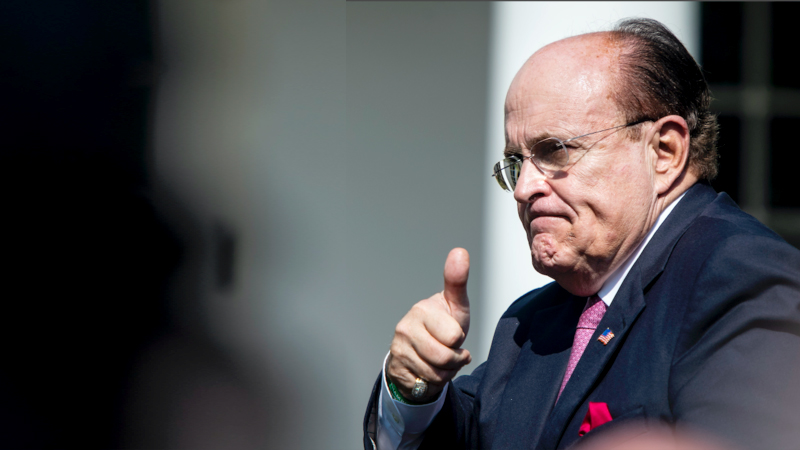 WASHINGTON - The federal investigation into two associates of Rudy Giuliani is exploring a wide range of potential crimes - includingwire fraud and failure to register as a foreign agent - as prosecutors dig into the pair's interactions with the president's personal lawyer and the main pro-Trump super PAC, according to people familiar with the investigation.

Giuliani's dealings with the two men, Lev Parnas and Igor Fruman, are being investigated by federal prosecutors at the U.S. attorney's office of the Southern District of New York. That office has already filed campaign finance charges against Parnas and Fruman and accused them of conspiracy and making false statements to the Federal Election Commission.

According to people familiar with the ongoing case, investigators are scrutinizing Giuliani's consulting business and eyeing donations made to America First Action, the main pro-Trump super PAC set up by his advisers and allies after his election, as well as its affiliated nonprofit group.

As part of the probe, federal prosecutors are examining a raft of other potential crimes, including foreign lobbying registration violations, destruction or alteration of documents, aiding and abetting federal crimes and foreign contributions to U.S. candidates, according to the people, who spoke on the condition of anonymity because of the ongoing investigation.

The list of possible crimes under investigation does not mean those charges will be filed. They do, however, indicate prosecutors are casting a wide net for wrongdoing as they examine the business and legal dealings of the president's personal lawyer and two Soviet emigre business executives who have been assisting Giuliani in the efforts to dig up damaging information about Democratic presidential candidate Joe Biden on the president's behalf.

Giuliani, who has not been accused of any crimes, has denied any wrongdoing. He did not respond to requests for comment. His attorney declined to comment.

Kelly Sadler, a spokeswoman for America First Action, said the group reached out last month to federal prosecutors in New York, offering to cooperate voluntarily. She said the group has received no subpoenas and follows the law, declining to comment further.

A spokesperson for the U.S. attorney's office declined to comment.

The October indictment of the two men does not mention Giuliani or suggest he was connected to the alleged crimes. But in the weeks after their arrest, prosecutors issued subpoenas to a number of individuals involved with Fruman and Parnas, asking for, among other things, any documents regarding Giuliani and his consulting firm, Giuliani Partners. The Wall Street Journal first reported the interest in Giuliani's firm.

In 2017, Giuliani's firm was hired by Pavel Fuks, a wealthy Ukrainian developer, to help update its emergency response system, according to Giuliani. Giuliani traveled to Ukraine in November to meet with top officials, including then-Ukrainian President Petro Poroshenko.

Parnas has previously told The Washington Post that Giuliani is a "very good friend" whom he got to know in 2016 while fundraising for President DOnald Trump's campaign.

Giuliani has referred to Parnas and Fruman as clients, and he has said he was paid $500,000 to help advise a financial security company started by Parnas called Fraud Guarantee.

After Parnas and Fruman were arrested, Giuliani denied any knowledge of wrongdoing on their part. In an interview, he said that he had seen the two men "quite often" and had "no reason to believe that they are anything other than decent guys."

One person with knowledge of the investigation said there is a particular interest in interactions with three key figures in the saga of Giuliani's pursuit of dirt on the Bidens from Ukraine: Poroshenko and former Ukrainian prosecutors Yuri Lutsenko and Viktor Shokin.

In recent days, Parnas's attorney, Joseph Bondy, has said Parnas would be willing to testify before Congress and explain what he knows about Giuliani, provided Parnas was given accommodations to avoid incriminating himself, which would probably require immunity. His campaign has included tweeting directly at lawmakers using the hashtag #LetLevSpeak.

Generally, Congress is wary about extending immunity to people under criminal investigation, fearful that public testimony could make their prosecutions more difficult.

The federal investigation into Parnas and Fruman is also delving into their efforts to secure business deals for themselves in the historically corrupt Ukrainian energy sector while they were also assisting Giuliani's work in that country.

Last week, federal prosecutors questioned a top executive of Ukraine's state-owned gas company about his encounters with the pair as they pursued energy deals.

Parnas and Fruman were arrested Oct. 10 at Dulles International Airport, where they were preparing to fly to Europe.

In the months leading up to the charges, the two assisted Giuliani in efforts to pressure Ukraine to launch an investigation of Biden, the former vice president, and his son Hunter Biden over Hunter's role while serving on the board of a Ukraine energy firm called Burisma.

Those efforts raised alarms inside the government, particularly at the State Department and National Security Council, where government officials feared the president's lawyer was conducting a kind of shadow diplomacy to generate attacks on Trump's political rival, according to congressional testimony.

That effortled to impeachment hearings in the House, where witnesses testified this month that Trump wanted the Ukrainian president, Volodymyr Zelensky, to announce an investigation of the Bidens, after which Trump would host Zelensky at a White House meeting. Some officials also said they believed the Trump administration held up nearly $400 million in security assistance as part of the effort to get Zelensky to make the announcement.

The indictment filed in October against Fruman and Parnas charged that the two broke campaign finance laws amid their effort to get the U.S. ambassador to Ukraine removed from that post.

The Justice Department charges that Parnas and Fruman disguised the source of a $325,000 donation made in 2018 to America First by giving the money in the name of Global Energy Producers (GEP), a purported liquefied natural gas company Parnas and Fruman controlled. Federal prosecutors say GEP was a front used to disguise the funds' true source and that the money for the political action committee came from "a private lending transaction between Fruman and third parties."

America First Action and America First Policies, an independent big-money operation supporting Trump, has emerged as a center of gravity in Trump's political world and a vehicle through which wealthy donors and top Trump aides have gained influence since 2017.

Trump officially gave it his imprimatur earlier this year when his campaign released a statement saying it was the "one approved" group.

Starting in early 2018, America First began hosting exclusive dinners catering to wealthy donors, giving them access to the president himself in small gatherings. Parnas and Fruman attended one such dinner in April 2018, in which they discussed the U.S. ambassador to Ukraine with Trump, The Post has reported.

Prosecutors said Parnas, a Ukrainian-born U.S. citizen, and Fruman, a Belarusian-born U.S. citizen, also schemed to exceed campaign donation limits in giving money to an unnamed U.S. congressman, at the same time that they were asking the lawmaker - identified by people close to the investigation as former congressman Pete Sessions, R-Texas - to get the U.S. ambassador to Ukraine removed from her job. Sessions has not been charged and has denied any wrongdoing.

In spring 2018, Parnas met with the congressman seeking his "assistance in causing the U.S. government to remove or recall the then-U.S. Ambassador to Ukraine," the indictment alleges. " . . . Parnas' efforts to remove the Ambassador were conducted, at least in part, at the request of one or more Ukrainian government officials."

Parnas has previously said he and Fruman helped set up a Skype call for Giuliani in late 2018 with Shokin, who was Ukraine's prosecutor general from 2015 to 2016, and an in-person meeting in New York this past January with Lutsenko, then Ukraine's top prosecutor, who had urged the removal of the U.S. ambassador, Marie Yovanovitch.

According to the indictment of Parnas and Fruman, the pair began working in March 2018 "to advance their personal financial interests and the political interests of at least one Ukrainian government official with whom they were working."