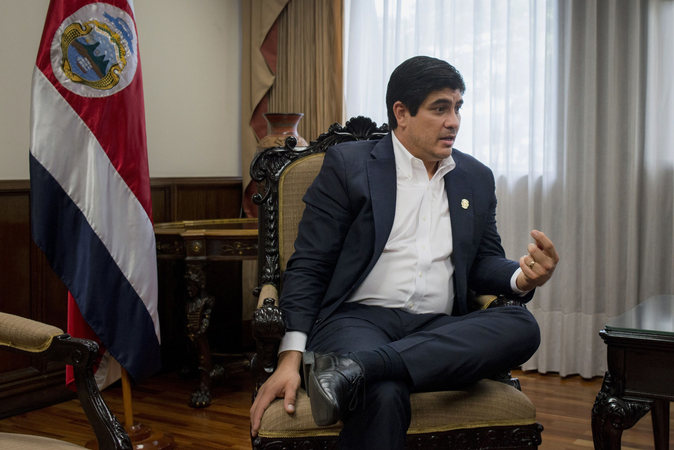 Carlos Alvarado, Costa Rica's president, during an interview at the presidential residence in San Jose, Costa Rica, on May 9, 2019. MUST CREDIT: Bloomberg photo by Marco Valle.

Costa Rica's fear of protesters is proving to be greater than its fear of credit ratings agencies, putting its public finances back on shaky ground less than two years after the nation narrowly dodged a financial crisis.

Moody's Investors Service on Monday downgraded the country to B2, five notches below investment grade, citing its repeated failure to narrow one of the region's widest deficits.

The government of President Carlos Alvarado has rejected tough austerity measures of the kind that triggered violent unrest in Chile and Ecuador in recent months. That's helped Costa Rica to remain a peaceful oasis in an unstable region, but it's also meant that the fiscal deficit ballooned to 7% of gross domestic product last year, the widest in 40 years.

A decade of high deficits brought the country close to full-blown panic at the end of 2018, when its bonds and currency plunged over fears that the government wouldn't be able to raise enough money to fund itself, and the central bank stepped in with an emergency loan. After years when congress held up unpopular tax increases, that shock helped convince lawmakers to pass a value-added tax.

It wasn't enough to restore the country to fiscal health.

"What the 2019 deficit shows is how difficult it is for Costa Rica to reduce the deficit," said Gabriel Torres, an analyst at Moody's, in an interview after the downgrade. "This is an ongoing issue that they can't seem to resolve."

On Monday, Finance Minister Rodrigo Chaves announced the government would sell the state-owned liquor distillery and a public bank to help narrow the spending gap and use nearly $400 million in budget surpluses from some government institutions to pay down debt. He also urged legislators to approve a $4.5 billion global bond package he plans to present to congress.

"Costa Rica can and must consolidate its public finances without more taxes and without cutting public services," Chaves told the legislature Monday. "Let's give Costa Rica a confidence boost and create the fiscal space for a more prosperous country."

The Finance Ministry and the presidency didn't reply to requests for additional comment.

The economy expanded 2.1% in 2019, the slowest pace in a decade as construction projects came to halt and consumers reduced spending after new taxes took effect, according to the central bank. Unemployment rose to 12.4% in December, one of the highest rates on record.

In a country where people are accustomed to a strong welfare state, Costa Rica allocates $2,193 on a per-capita basis to social spending versus $562 in El Salvador and less than $300 in Honduras and Guatemala, according to the World Bank.

The government will need to tread carefully this year to avoid either unrest at home, or another asset sell-off, said Nathalie Marshik, director of emerging market fixed income for St. Louis-based Stifel Financial Corp.

"They did not want to face a Chile or Ecuador situation at home, however this means they have absolutely no room for error in 2020," Marshik wrote in a response to questions.

After the 2018 sell-off, bondholders were reassured by the passage of a balanced-budget act, or "fiscal rule," set to take effect this year, to limit public spending as debt levels rise. The rule addresses current spending while shielding public investment and tightens when public debt passes 60% of GDP, which the central bank projects it will this year.

If the government backtracks on its fiscal commitments or congress blocks its efforts to sell bonds overseas, the country could see another dive in its bonds and currency, Marshik said.

After Monday's downgrade, the nation's dollar-denominated bonds due in 2045 fell 1.5 cents to 105.2 cents on the dollar, the biggest one-day slide since October. Chaves said the downgrade will cost the government $250 million annually.

The central bank said in its 2020 outlook that a "strict application" of the fiscal rule will reduce the deficit to 5.9% of GDP this year and 5.7% next year. The Finance Ministry has pledged "strict and robust" implementation of the fiscal rule, though that's easier said than done with institutions such as public universities and the judiciary vowing to resist spending curbs.

"The implementation of the fiscal rule will definitely have some risks around it," said Carlos Morales, director of the Latin America sovereign team for Fitch Ratings. "There has been political and social resistance from autonomous institutions to decreasing the wage bill, so the government will likely face more social backlash on its expenditure restraint program."

Authorization for external borrowing requires support from two-thirds of congress, forcing the government to negotiate with opposition parties. Any signs that the government is straying from its promise to narrow the deficit will make working across the aisle difficult, according to Eurasia Group analyst Risa Grais-Targow.

Debate over the borrowing request will likely be drawn out, and "fiscal consolidation challenges may also complicate some pending multilateral loans," Grais-Targow wrote in a research note Feb. 3. "Such dynamics will leave the government more dependent on local market sentiment and increase financing uncertainty."