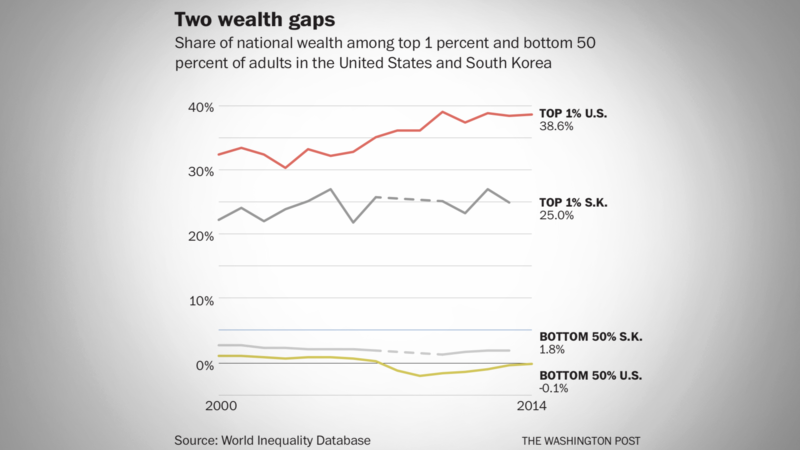 Korean director Bong Joon-ho's "Parasite" is a dark parable about the yawning gulf between the rich and the poor in South Korea. It's a story of a society where the working class have no hope of attaining a better life, and instead squabble among themselves for the literal scraps of prosperity cast off by the wealthy as they move serenely through their charmed lives.

The film and its message have strongly resonated with American audiences, and last week's best picture win means its stateside influence is only likely to grow. That's probably not an accident: By any number of measures, inequality here in the States is much, much worse than in Bong's South Korea.

Here's one way to visualize Korean inequality: According to the World Inequality Database, an authoritative resource on income and wealth around the world, the top 1% of South Koreans own about 25% of the nation's wealth, while the bottom half of the population owns just under 2%.

Think of it this way: If South Korea were a country of 100 people and the nation's wealth were a pie with 100 slices, the richest person would get 25 slices of that pie all to himself, while the poorest 50 would have to split two slices between them all. That disparity is at the heart of "Parasite."

Returning to the pie analogy, the richest American gets a whopping 39 slices, while the bottom 50 don't have any. In fact, they are actually in pie debt, collectively owing a tenth of a slice to their creditors (most of whom, incidentally, are probably in that top 1%).

Looking at income, rather than wealth, paints a similar picture: The top 1% of South Koreans earn about 12% of the national income, while in the United States that figure is more than 20%.

It's worth noting that other sources of inequality data, such as the Federal Reserve, give slightly different figures for these breakdowns, owing to the different ways you can calculate the distribution of a nation's wealth. The reason I'm using the World Inequality Database data is that it allows for relatively easy comparisons between countries.

Going back to the data, while the situation in South Korea is indeed dire, at least the bottom half owns something of value. In America, the bottom 50% have literally none of the nation's wealth and, in fact, have a negative net worth. That's a relatively new phenomenon: As recently as the late 1980s, the bottom half of Americans could claim several percent of the country's wealth as their own.

As many economists have noted, growing inequality in the United States is no accident, but rather the direct result of policy decisions made by lawmakers and their wealthy allies in the business community. As the United Nations recently put it in a report on global inequality, "People in positions of power tend to capture political processes." The wealthy use their power to write rules that allow them to accrue more wealth.

But there are some big differences. South Korea provides universal health care, for starters - something many economists and public health experts have identified as a key tool in the fight against poverty. The country also provides much more support for working families: New parents can claim up to 40 weeks of paid leave (American parents, by contrast, are guaranteed nothing). The country also provides universal early-childhood education, something lacking in the United States, and subsidizes child care for children under age 3.

Overall, it's not difficult to imagine that if the United States had similar social programs and collected a similar level of corporate and estate taxes, the distribution of wealth here would be similar to that in South Korea.

None of this is to minimize the extent of inequality experienced by South Koreans. There are a number of factors that make the country's economy unique, and potentially uniquely miserable for those living at its lower end. The country's economy developed rapidly after the Korean War, one consequence of which has been disparate outcomes between larger and smaller businesses. Youth unemployment is high, with a growing sense among the young that "no matter how hard people try, they remain stuck at the bottom of the social ladder," according to Choong Yong Ahn of South Korea's Chung-Ang University.

That frustration with a rigid hierarchy is at the heart of Bong's film, and its reception in America nevertheless suggests that many Americans find they can relate. As the director himself said last year, "The film talks about two opposing families, about the rich versus the poor, and that is a universal theme, because we all live in the same country now: that of capitalism."

Tags:
Parasite Korean inequality the rich and the poor America