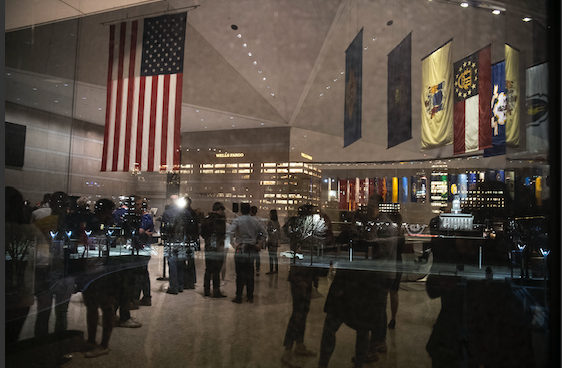 Media and staff set up before Joe Biden speaks at the National Constitution Center in Philadelphia, after canceling a presidential campaign event in Cleveland over health concerns and coronavirus on March 10. MUST CREDIT: Washington Post photo by Carolyn Van Houten.

In fictional imaginings of a lethal pandemic, a visceral panic often sweeps through frightened crowds and leads to decidedly uncivilized behavior.

In "World War Z," the 2006 novel that became a top-grossing movie, a virus that spreads from China turns half the world's population into zombies. People do not react well. Mayhem - a "Great Panic" of looting, crime and mass migration - ensues. Similar chaos erupts in the long-running TV series "The Walking Dead," "Panic in the Streets" (1950), or "Contagion," the 2011 film that is suddenly a streaming hit. 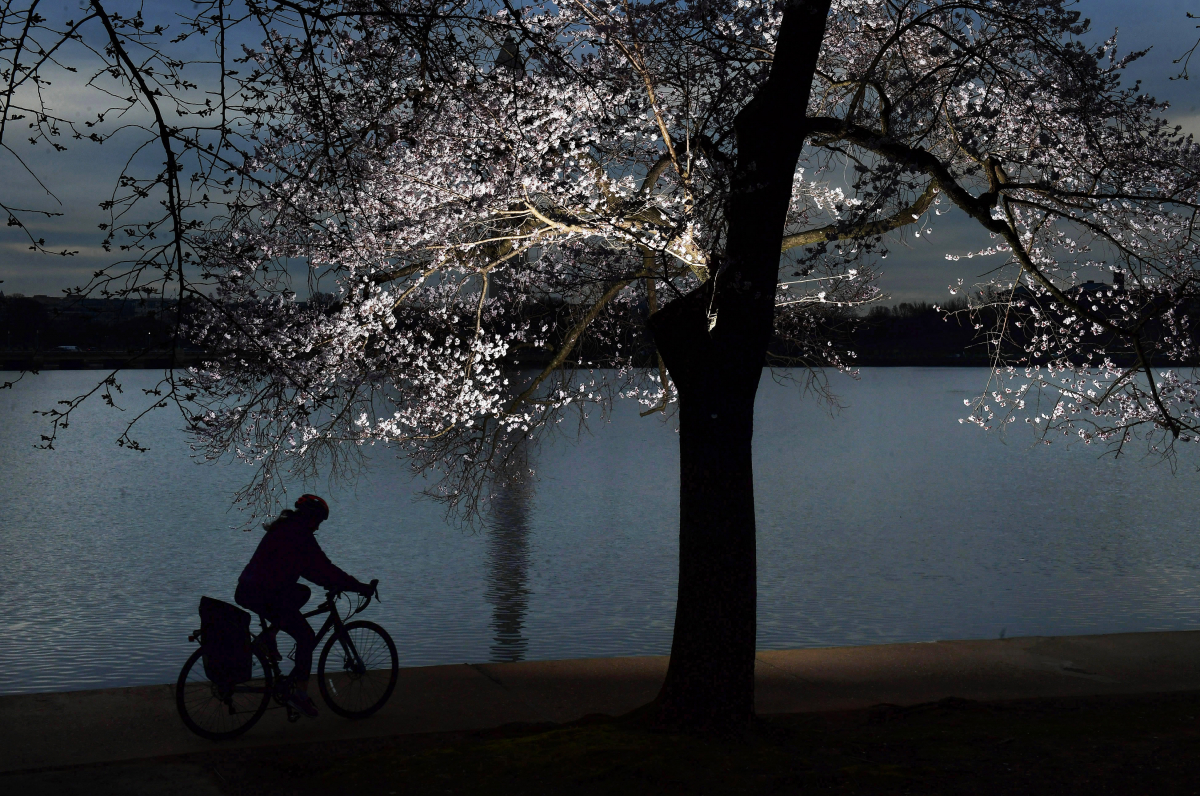 In real life, however, the coronavirus pandemic now spreading across the planet has triggered little in the way of visible public panic. In Washington D.C., far from ostracizing those who may be vectors for the bug, people have rallied around the church where the city's first case appeared. In the Seattle area, so far the hardest hit U.S. region, stories abound of neighbors helping one another. And in Italy, where the government has taken extraordinary measures to shut down public life, calm has prevailed even as hospitals consider harsh decisions to ration medical care to people with the best chances to survive. 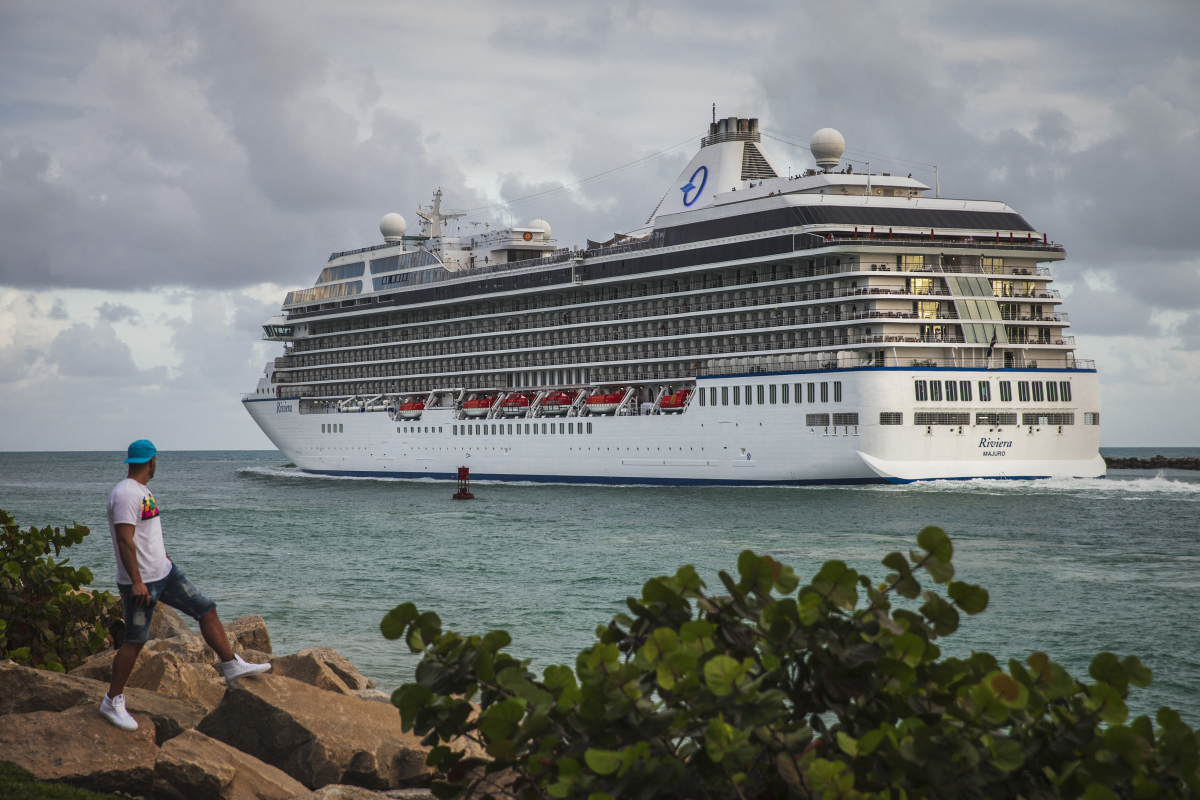 Certainly, some degree of panic has been evident in the severe sell-off on Wall Street and the rush to stock "pandemic pantries," as Americans in some parts of the country clear out shelves at grocery stores and other retail outlets. But there's been no degradation of law and order, no sign of social unrest.

The line dividing a cautious and responsible reaction from a panicked, entirely self-protective and competitive response can be thin and not entirely rational, according to those who study how people behave in the face of contagious, fatal illness.

It doesn't take zombies to trigger unhelpful public hysteria, said Jerry Rice, a social science teacher in Georgia whose doctoral research looked at what drives fears of disasters and why some people become obsessive preppers while others either panic or remain calm.

"What people fear the most is what they can't control and what's new," Rice said. "A pandemic like this is both of those things. We haven't experienced anything like this since the 1918 flu. In contrast, people aren't as afraid of car travel, because we know it so well, even though car travel kills far more people."

The wall-to-wall news coverage and social media chatter about the crisis can provoke anxiety as much as it informs and allays fear.

"Right now, panic is running neck-and-neck with cynicism, and cynicism is winning," said longtime radio host Chip Franklin, referring to people who have called in to his show that airs on KGO in San Francisco. "Talk radio is essentially people 45 and older - they've lived through 9/11 and they've lived through the '08 crash. They're worried about their jobs, worried about the market shutting down. We hear a lot of people's fears, but they're not panicking because they really believe we're going to get through this."

Fear by itself doesn't necessarily lead to panic. Indeed, fear can bring out the best in people.

"A society united in fear is more cohesive," said Simon Briscoe, a British statistician who wrote a book, "Panicology," on when and why people panic. "One where people fear different things is liable to fragment."

When Briscoe wrote his book on panic and pandemics a decade ago, dire warnings about swine flu, bird flu, meteors and genetically modified foods seemed to be part of a pattern of fizzles that left experts sputtering after projections of doom fell short. Briscoe argued that the modern era had produced a tendency toward panic that was neither healthy nor sustainable.

"It was quite easy to be dismissive then," he said this week. Now that a real pandemic has developed, he says it has become clear that the key to preventing panic is good, dependable information.

Appeals to people's goodness can help, historians say, but it matters who is making the appeal and how their leadership comports with their words.

"We're in this together, to do the right things with calm and protect the citizens of the world," said Tedros Adhanom Ghebreyesus, director general of the World Health Organization. "It's doable."

Panic tends to bubble up when messages from politicians clash with their actions, or when governments send mixed messages.

In his Oval Office address to the nation Wednesday night, President Donald Trump reversed himself on several counts, telling Americans, for example, to stay home if they become ill rather than to push through as if they had a cold. But the president's message remained rhetorically distant from the blunter, harsher account coming from the government's top scientific voice on the virus issue, Anthony Fauci, head of the National Institute of Allergy and Infectious Diseases.

"The risk is very, very low" for most people, Trump told the nation.

"Things will get worse than they are," Fauci told Congress.

The Internet has created the impression among many people that anyone can be an expert on anything, Briscoe said. Add in the open sewer of mis- and disinformation on social media and it is more difficult than ever for governments and scientists to expect that the public will accept and follow official advice and direction.

But it's still possible for governments, scientists and other experts to avert panic and bring people together, Briscoe said.

"In Britain, the politicians have stepped back and put forward its chief medical and science officers as the public face, and we have daily updates from these experts that have really provided an anchor," he said.

Similarly, this week, Washington D.C.'s government sought to remind city residents that they live in a society with rules and expectations. The government sent out missives spelling out the right to paid sick leave, offered official assistance in cracking down on price gouging, and spelled out ways to protect against scammers taking advantage of fear.

But information can inflame just as easily as it can calm. When scientists and public health experts at Johns Hopkins University gathered in October to game out what might happen in a pandemic, they didn't know how prescient their exercise would be: They played out a scenario in which a coronavirus spread from China to the rest of the world.

The exercise, called Event 201, imparted important lessons, said Dr. Eric Toner, a Hopkins internist and emergency physician at the university's Center for Health Security, but those lessons - more international cooperation, better funding for intensive care and other medical facilities - applied more to long-term policy initiatives than to the immediate crisis.

The bottom line of that October exercise is creating more anxiety than anyone anticipated: The group concluded that 65 million people would die under their fictional scenario.

"The story line that drove our exercise is playing out in real time," Toner said. "In retrospect, we probably would not have included that number. But we did because it was important to the exercise to get people in the right frame of mind, that this kind of event is on an unprecedented scale."

Toner doesn't expect 65 million people to die - the scenario purposely used a huge number to drive home the gravity of pandemic - but he does worry that healthy concern could spiral into panic if authorities don't "forthrightly tell people things they don't want to hear."

"Panic is bad, but some degree of anxiety is good and adaptive," he said. "It's normal to be anxious if that drives people to do constructive things. The vast majority of people who get this illness will be just fine. But that small percentage who do poorly is a big number, and it's good for people to understand that while this may not be a risk to me personally, it is to the society in which I live."

The fear that productive and healthy concern might devolve into outright panic is leading many public health officials to focus on getting politicians to understand that nothing matters more than giving the public constant trustworthy and frank information. One factor that determines how such data is received is people's state of mind about the messengers who deliver the news and set policies.

The prospect of a widespread loss of confidence in the government's ability to handle the epidemic is magnified by the recent breakdown in trust in the news media, said Amy Ballagh, a vice president at Georgia Southern University whose research focused on how news media coverage of epidemics alters public behavior.

"Every time there's a death, it's in the news - a countdown of deaths that is causing terror," she said. "And it's worse with this epidemic because you have people in leadership saying things that make people distrust authority - things about the 'deep state' and 'fake news' and statements that undermine science. When people decide they really can't trust anyone, that's when they take things into their own hands. That's when you see panic buying."

The result is runs on face masks even though scientists urge that that supply be reserved for health workers, or people stockpiling hand sanitizers, antibiotics and grocery staples. "People in my community are doing this and it causes disruption in the supply chain," Ballagh said, "and that creates the thing we fear the most: lack of confidence."

The best way to avert panic would be for the country's leaders to present "a clear, consistent, accurate message that is unified," Rice said. "Instead, we have the president saying one thing and people in the administration saying another. That feeds into this widespread distrust of the government that's been around at least since Hurricane Katrina, which spread this notion that the government won't be there for you, taking that idea beyond the prepper world into the general population."

The line between healthy adaptation to an emergency and counterproductive panic has much to do with two of the most powerful forces in any human existence: denial and survival. Often, psychologists say, the two instincts work hand in hand to steer people away from danger. People need a strong sense of denial to cope with the risks involved in daily life.

To send your child to school, you must accept that others will protect your baby as you would, even when you are anxiously aware that no one else has the same absolute devotion to that child as a parent does.

To continue with daily life in the face of a deadly pandemic, you must accept a certain degree of risk or else you cannot obtain food and care for your family.

One of many paradoxes the world faces in a time of dangerous uncertainty is the idea that time both heals and provides false comfort. Over time, with good guidance, most people will figure out how best to cope and to help others get through this period. But over time, as even the most dire and dark news gets absorbed into people's daily lives, "there's a saturation effect when there's just too much information and people just tune out," Ballagh said. "Over time, concern drops, and that can be dangerous too."