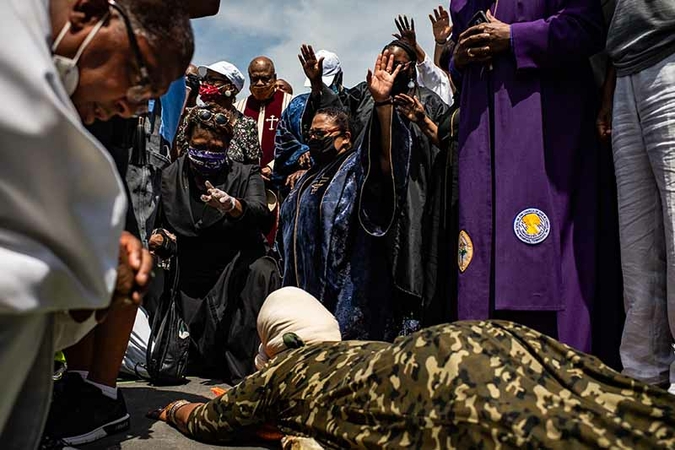 Twin Cities clergy members pray Tuesday at a memorial for George Floyd in Minneapolis. As unrest tied to Floyd's killing while in police custody has spread to other parts of the country, including Washington, a relative calm has emerged in Minneapolis, even as protests continue. "We have really seen the temperature change," said John Harrington, commissioner of the state Department of Public Safety. MUST CREDIT: Washington Post photo by Salwan Georges

MINNEAPOLIS - Ash and broken glass still litter parts of Lake Street, where some burned-out husks of buildings continued to smolder after violent protests last week over the killing of George Floyd led to fires, looting and destruction.

But as unrest has spread to other parts of the country, including Washington and New York, something else has emerged on the streets here in the past two days: relative calm.

The fires and looting, which damaged or destroyed at least 300 businesses across South Minneapolis and parts of neighboring St. Paul, Minnesota, have largely stopped. While protests continue, they have been peaceful. State officials said 120 arrests had been made Monday and early Tuesday, mostly of protesters in violation of the region's 10 p.m. curfew, and all had been taken into custody without incident.

"We have really seen the temperature change," John Harrington, commissioner of the state Department of Public Safety, said at a Tuesday news conference where he and other state officials expressed gratitude for the "peace" that has spread across the city after days of unrest.

Gov. Tim Walz, a Democrat, announced Monday that the state would begin to draw down some of the National Guard troops that were called up to help local police restore order to the streets. But many troops remain more than a week after a viral video captured Floyd, a 46-year-old black man, facedown on the street and struggling to breathe as a white police officer restrained him with a knee on his neck. Floyd lost consciousness and was later pronounced dead at a hospital.

The four police officers involved in the incident were fired. Derek Chauvin, the officer who was video-recorded with his knee on Floyd's neck, was arrested and charged with third-degree murder and manslaughter. He is set to be formally arraigned Monday, while the three other officers remain under investigation, according to state and county prosecutors.

On Tuesday, Walz announced the state would also pursue a civil rights investigation into the Minneapolis Police Department, examining police policies and procedures to uncover whether the department has engaged and discriminatory behavior toward people of color.

Walz said the investigation was an effort "to restore trust within those communities who have been unseen, unheard and believe that those who are charged to serve and protect not only don't do that, they work against them."

"And I say this as a white man who walks through life with pretty much relative ease," he added. 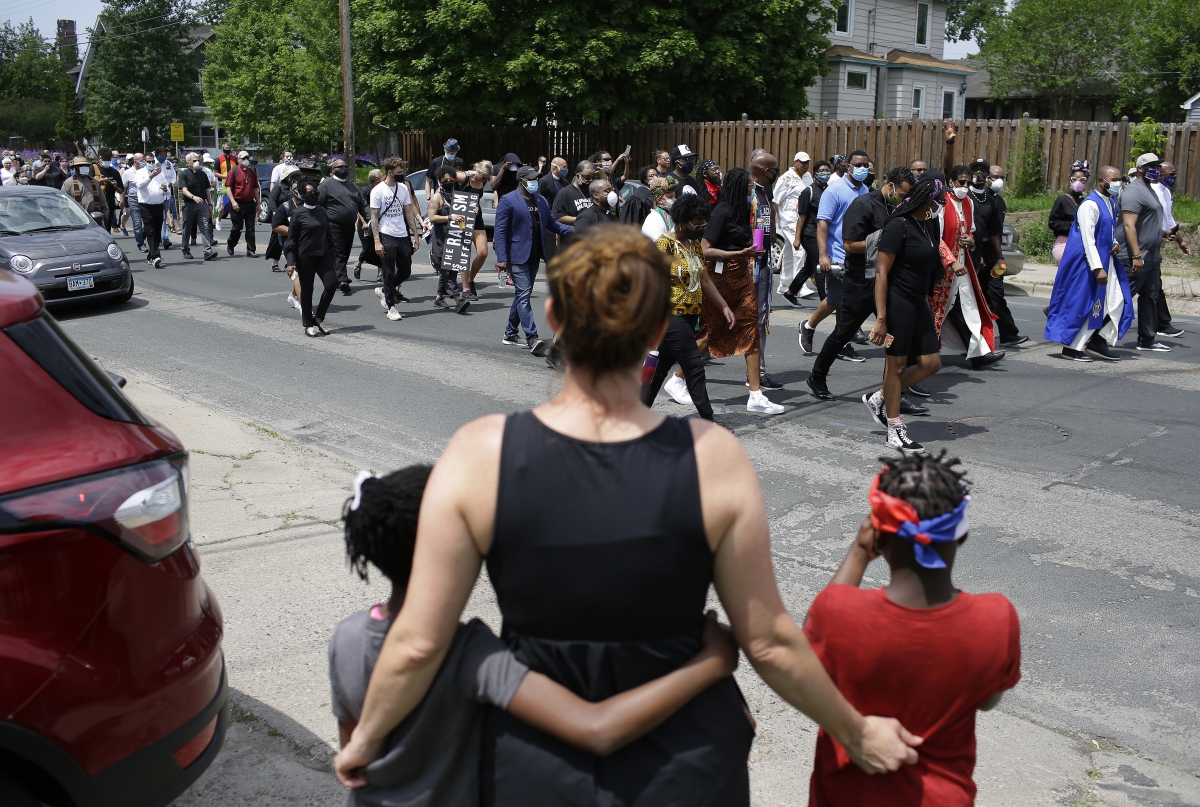 Across the city, which had felt like a war zone in recent days, there were signs of some calm. On Monday, restaurants across the state were allowed to reopen their outdoor seating for the first time in months amid the deadly covid-19 pandemic, the other crisis that has devastated local businesses and left many out of work.

Just blocks from the 3rd District police station, which was destroyed and where many neighboring businesses were looted and burned, some bars and restaurants, their windows still covered in plywood, had opened for business. The same was happening in other parts of the city, which had largely been spared by the unrest but where many people remain on edge.

At Stanley's, a bar just blocks from where people were peacefully protesting outside the headquarters of the local police union, employees were busy putting out tables and chairs for their first day of in-person service in months.

But Kevin Smith, 35, one of the managers, admitted that he and others were distracted.

"A lot of us have been at the protests in support of everything that has been going on," Smith said. "We are ready to work, but our minds are very much in other spots right now."

In South Minneapolis, workers at Bryant Hardware on 36th Street were trying to get back to normal. Last Friday, someone broke in and tried to steal the cash register as looting broke out, but neighbors had chased the people away, sparing the store from the worst of the destruction.

"We're are so lucky," said Carey Jones, a Bryant employee, speaking from inside the store where the smashed windows were still covered in plywood.

Back along Lake Street, hundreds of volunteers had descended on the area, scrubbing at graffiti and attempting to do whatever cleanup they could. But many residents remain on edge. They have set up makeshift roadblocks - including using parked cars to prevent traffic from coming down their blocks - and have instituted neighborhood patrols, still unconvinced that police will be there to help them if violence erupts again.

"When the sun goes down . . . it feels like it goes from gardening to guarding," said Bridget Charon, 45, as she and Jennifer Quam, 45, strolled through their neighborhood Tuesday, their green floral dresses a stark juxtaposition to the burned-out buildings.

Quam, who lives near Charon, said she and other neighbors had been vigilant, appointing block leaders to guard their streets overnight.

"The white supremacy groups, we see them without their plates and with their white supremacy emblems on the back of their trucks," she said. "We make sure they know we're here, ready."