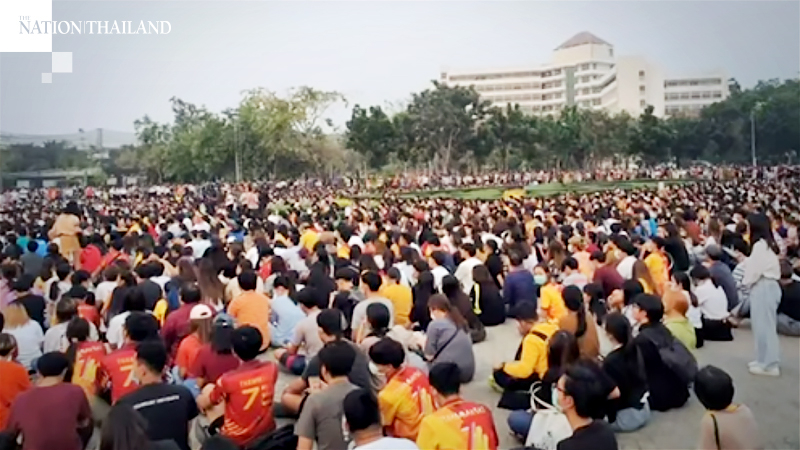 The latest call for debate on the monarchy came on Monday during a rally by more than 2,500 protesters at Thammasat University’s Rangsit Campus in Greater Bangkok.

Most of the participants were students from Thammasat, Mahasarakham University and vocational schools.

Protesters reiterated their demand for Prime Minister Prayut Chan-o-cha’s government to dissolve Parliament, change the military-sponsored Constitution, and stop using police to crush peaceful protest. They aired the topic of the monarchy in public again after protest leaders raised the issue during two previous gatherings at Bangkok’s Democracy Monument and in Chiang Mai.

Lawyer and activist Anon Nampa, who is out on bail after rally-related charges, took to the stage again to insist that people should be able to question the role of monarchy in public and not be threatened for exercising their right to free speech.

He also suggested the law should not delegate excessive power to the royal family. However, he insisted his proposals were not aimed at overthrowing the monarchy, and called on media to show solidarity with the pro-democracy side.

The Constitution should be amended to abolish the military-appointed Senate, said Anon, suggesting a deadline of December 1 for the 250 senators to leave office.

Pavin Chachavalpongpun, a political academic self-exiled in Japan, appeared via video during the rally to support Anon’s speech and insist that public debate on the monarchy was a good thing.

Phanuphong Chatnok, another activist recently arrested and released on bail, spoke against the threats used by government to intimidate people who voiced opposing opinions. He asked the government to stop stalking and gathering information on critics.

The rally concluded with the reading of a manifesto containing 10 demands.

Among them was a proposal to nullify Article 6 of the Constitution which prohibits any legal action against His Majesty the King, and to scrap the lese-majeste law which shields the King from criticism. They also urged the government to separate the King’s personal wealth from assets under the Crown Property Bureau, which are estimated to be worth many billions of dollars. The manifesto also asked the government to cut the annual national budget of the palace in line with economic conditions, adding that donations for the royal family should come to an end. It also proposed an end to one-sided education that praises the royal institution. Meanwhile, the monarchy should not to endorse any coup and should refrain from expressing political views in public, it said.

Protesters also called for investigations into the suspected forced disappearance of individuals who had been outspoken against the monarchy.

Protest leaders said their proposals were not aimed at toppling the monarchy but to bring the institution within the bounds of democracy and constitutional monarchy.

The protesters have drawn praise from many Thais, especially netizens, for their bravery in standing up to the establishment. However, they have also attracted fierce criticism for airing opinions about the monarchy, which some say could lead to political violence.

Some have also criticised Thammasat administrators for allowing the protest.

Prinya Thaewanarumitkul, vice rector at Thammasat University’s Rangsit campus, apologised via Facebook today over critical comments made about the monarchy at the protest.

The vice rector said students had asked his permission for a rally calling on the government to amend the Constitution, dissolve Parliament, and stop menacing peaceful critics. Prinya said he arranged for organisers to meet with police on August 7 and both sides had agreed to limit the protest to the three topics.

The vice rector said he observed the rally from 7pm to 8pm, when speeches stayed within those bounds, but he learned later that some speakers, especially those not from Thammasat, had talked about the role of monarchy.

He said Thammasat University granted students freedom of speech, but it should be exercised within the law. “Initially, I apologise and accept responsibility for what happened,” he posted on Facebook.