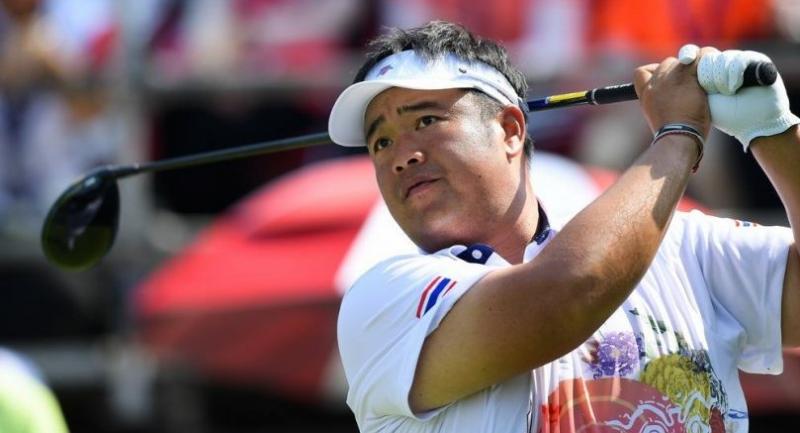 CHON BURI - KIRADECH APHIBARNRAT turned the home hero when he saved a par putt on the final hole to spearhead Thailand to a 15-13 win over Japan in a nail-biting final day of the Amata Friendship Cup at the Amata Spring Country Club.

With a 10-6 lead from the foursomes and fourballs, Thailand needed just 4.5 points from yesterday’s 12 singles matches, but the task turned out to be more difficult than it was supposed to.

Japan stayed true to their fighting nature, rallying from behind to breathe down Thai necks at 13-14. It all came down to world No 38 Kiradech and fellow PGA Tour player Satoshi Kodaira to decide the victors – and it was the Thai who made a four foot-par-putt to close the deal.

“It was the most exciting putt of my life,” said the 29-year-old winner of four European Tour titles. “I have played this course many times but I was so nervous before the last putt. I knew I had to make it not only for myself but for my team and Thailand,” said the Kingdom’s No 1.

Japan started the day in ominous style with Yuto Katsuragawa winning the battle against fellow amateur Sadom Kaewkanjana 1-up. Teenage prodigy Atthaya Thitikul, also an amateur, then scored the first point of the day for the home team, beating Yuri Yoshida 1 up to extend the overall Thai lead to 11-7. “I wish I could have won more points for our team,” said Atthaya, who contributed 1.5 over the three days. “Sometimes you try your best but the other team does better,” added the 15-year-old Atthaya who aims to defend her title in the Women’s Amateur Asia Pacific Championship in Japan next year.

Thailand went up to 12-7 when Jazz Janewattananond produced his fourth point of the tournament with a 1-up win over Kodai Ichihara.

“I’m more motivated when I play for the country. We all agreed there’s no need to apologise if anyone make mistakes, because we all want to win,” said the two-time Asian Tour winner. Japan struck back in the next three matches to reduce the deficit to 9-12. Former world No 44 Fumika Kawagishi outclassed Thai No 3 Pornanong Phatlum 5&3, followed by an upset win for one-time Japan Tour winner Masahiro Kawamura over eight-time European Tour victor Thongchai Jaidee 3&2 and Erika |Hara defeating Pannarat Thanapolboonyaras 1 up.

Thailand stopped the bleeding when Prom Meesawat halved with Ryuko Tokimatsu for a total score of 12.5-10.5.

Thidapa Suwannapura then stretched the Thai lead to 13.5-10.5 with a 2-up win over Sakura Koiwai before veteran Prayad Marksaeng halved with Hideto Tanihara for 14-11. “I was nervous all the time as she put up a great fight. I made lots of birdies but I missed for bogeys too. It was a good tournament as I got to play with Thongchai Jaidee who taught me a few things,” said the third Thai to win on the LPGA Tour this year.

Thailand were half a point from victory and Moriya Jutanugarn could have brought it home but instead missed her three-foot birdie putt on the 18th hole. Two-time Japan LPGA winner Mami Fukuda then saved par to win 1 up and close the gap to 12-14.

Japan then threatened to pull off a “miracle in Chon Buri” when Thailand’s world No 1 Ariya Jutanugarn was stunned by No 7 Nasa Hataoka, 3&1. But then up stepped Kiradech to save the day. “I knew Kiradech would bring home the victory as he is a tough player. It was such an amazing ending,” said Ariya.

Thai captain Boonchu Ruangkit admitted he didn’t expect the final day would go to the wire.

“I thought it would be over sooner. The Japanese women putted so well. It was a very exciting day,” said the Thai legend.

Japanese captain Naomichi “Joe” Ozaki said: “We put up a fight. I give credit to all my players for great teamwork.”

Tags:
- KIRADECH APHIBARNRAT turned the home hero when he saved a par putt on the final hole to spearhead Thailand to a 15-13 win over Japan in a nail-bitin