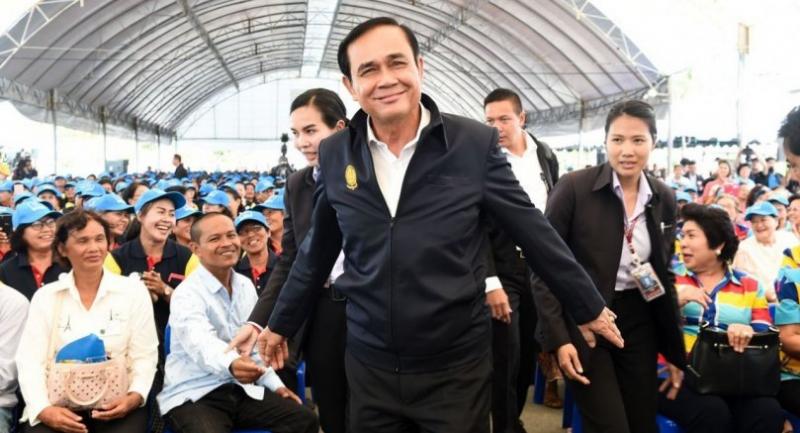 PRIME MINISTER General Prayut Chan-o-cha yesterday expressed concern over participating in the Phalang Pracharat Party’s election campaign, saying it exposed him to the risk of being targeted by his opponents.

In response to the party’s plan to have Prayut, its candidate for PM in the upcoming general election, take the stage at its rallies, the premier said he needed to consult his legal team about what he could or could not do.

“I have to be more careful. I know that many people plan to sue me or target me [for supposedly violating certain laws.] So, please feel for me and don’t be too hard on me,” he told the media during a press conference after the weekly Cabinet meeting.

There could be a way for him to meet the public without violating the laws, he added.

A source from Phalang Pracharat Party said that it was likely Prayut would choose to not appear on any stage of the party. Prayut’s visits to constituencies in order to meet voters will be considered on a case-by-case basis.

Having the premier appear on-stage at party election events could result in attacks by other parties and affect Phalang Pracharat’s popularity in the lead-up to voting day, the concerned source said after a party meeting of key figures yesterday.

“So, we think he should not take the stage. He actually has [his own] channels to communicate with voters,” said the source. Phalang Pracharat is planning a rally this Sunday in Nakhon Ratchasima province and is expecting a large crowd. The party had asked Prayut to appear on the stage alongside local constituency candidates, as the province is Prayut’s birthplace. The Election Commission [EC] earlier ruled that the premier can participate in the election campaign due to his affiliation with the party, despite his multiple and continuing roles in government and criticisms that state resources could be misused.

Meanwhile, an activist group led by Anurak Jentawanit aka “Ford Red Path”, a red-shirt supporter, yesterday submitted a letter to the EC requesting the agency investigate and remove Prayut from the PM’s candidate lists on the grounds that he is disqualified because of his status as a state official.

The group said that both Suthep and Paiboon were prosecuted by the Office of the Attorney-General on treason and terrorism charges over their involvement in 2013-14 political protests. The acts were hostile to the democratic system with the King as the head of state, the group said.

Regarding the selection process for the new 250 senators, Prayut, speaking as head of the National Council of Peace and Order (NCPO), insisted they would come from different sectors. “I will be the last person who decides [who will be chosen as senators]. Don’t worry. I will not take sides. I want the country peaceful and stable and with no conflicts,” he said.

Of the 250 senators, the junta body will pick 194 senators from 400 names nominated by a selection committee chaired by Deputy Prime Minister and Defence Minister Prawit Wongsuwan.

Another six senators will come from chiefs of the Armed Forces based on their positions. Another 50 senators, will again be chosen by the NCPO from 200 senators elected under a process overseen by the EC. The new senators will play an |important role in electing the next prime minister.