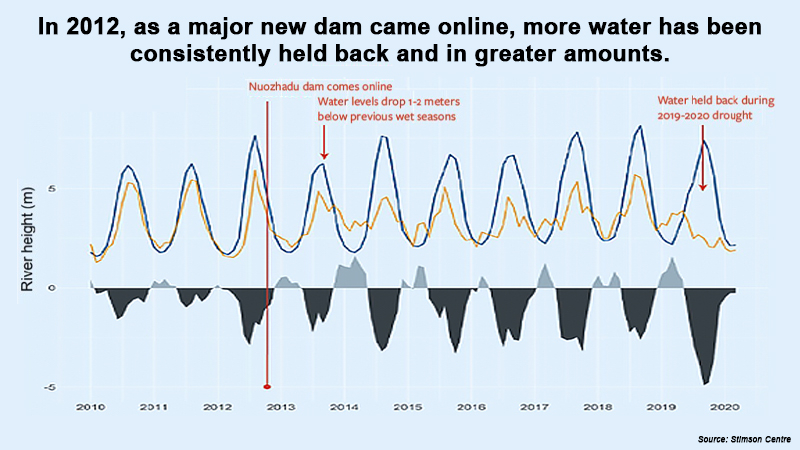 Researchers are worried that Chinese dams will hold back much of the water in the Mekong River this year, similar to last year's erratic flow after the monsoon which exacerbated the drought in the Northeast of Thailand, Laos, Cambodia and Vietnam.

China's dams have recently contributed towards aggravating the drought in the Northeast of Thailand and other lower Mekong countries like Laos, Cambodia and Vietnam, according to a group of researchers in the United States. 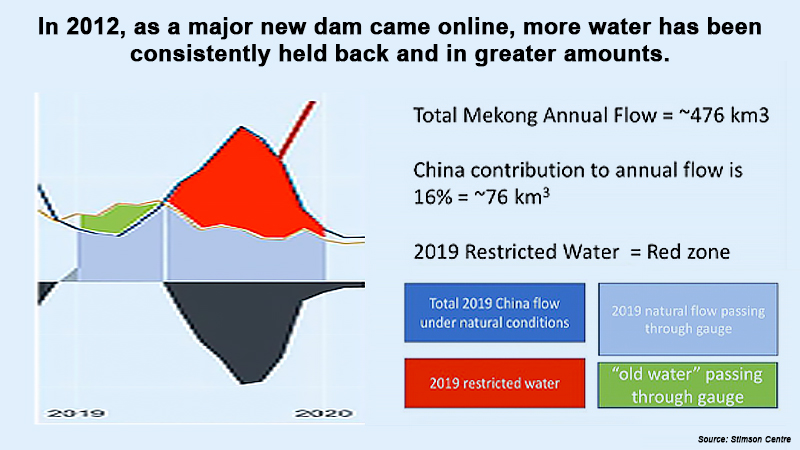 “We are not saying that dams in China cause the drought in Thailand’s Khon Kaen province and Vietnam; what we are saying is that it exacerbates drought in the lower Mekong mainstream,” said Brian Eyler, Southeast Asia programme director at Stimson Centre and author of the “Last Days of the Mighty Mekong”.

He warned Thai investors who are investing in the hydropower Xayaburi Dam on the Mekong in Laos with high profit expectation, saying the dam's operational capacity was at the mercy of China which operates dams in the upper Mekong.

Shopping malls in Thailand also cannot rely on consistency of electricity power supply generated from dams in Laos, he warned.

The researchers’ warnings came during an online panel discussion hosted by Stimson Centre, a think tank in Washington, recently.

China has built and operates 11 dams in the upper Mekong and plans to build eight more dams. 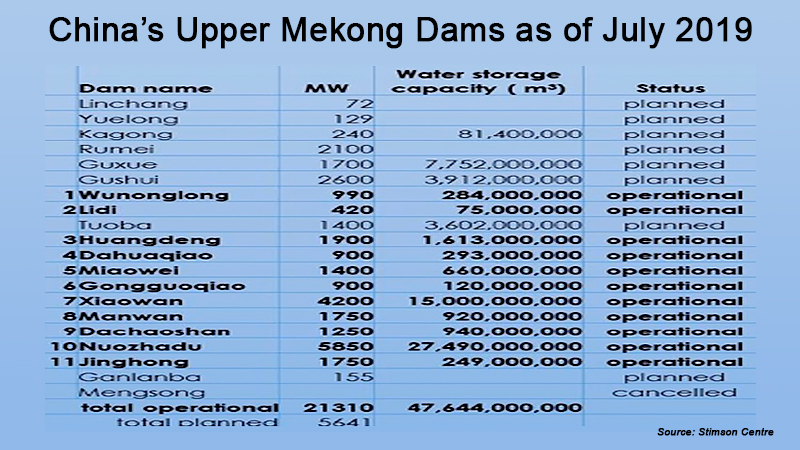 The natural flow of water has become very erratic in recent years, especially after the Nuozhadu, the largest dam on the Mekong, was built in late 2012, said Alan Basist, president and CEO of Eyes on Earth, and co-author of the study “Monitoring the “Quantity of Water Flowing Through the Upper Mekong Basin Under Natural Conditions”.

The water gauge at Chiang Saen, a district of Chiang Rai province in the north of Thailand, that measures flow found water had receded to an all-time low in last year’s wet season, added Eyler.

Basist, who has developed a wetness index that can measure the level of drought, noted that the index has strong correspondence with soil moisture and water discharge in Mekong.

Applying the index, Basist found that there was enough moisture in the upper Mekong in China but it was dry in Thailand last July in the rainy season.

Water flow has changed dramatically from natural flow since 2012, creating irregular patterns. Water was discharged in the dry season and held back in the wet season by China, said Basist.

During the wet season, a large volume of water is missing downstream. The year 2019 was completely different from the previous year; it was more severe, he pointed out.

Where water was missing in the wet season of 2019, severe drought developed in Thailand and in lower Mekong countries, but wetness was enough in the upper Mekong in China in July, the wet season month, last year.

The abrupt change in water flow has affected not only people in Thailand but also in Laos, Cambodia and Vietnam where 10 million people depend on agriculture and fishing in the river downstream, he said.

China's authorities dismissed the findings, arguing that the drought in Yunan, in southern China, and Southeast Asia was caused by the effects of El Nino, the key factor behind the low water level in the Mekong last year.

However, researchers said that they found conflicting data regarding China’s claims, as China has held back water in vast volumes in its dams.

They have also called for more transparency in dam construction and operations in China.

Researchers also found that more Thai investors than Chinese investors have invested in dam construction in Laos, which supplies electricity to Thailand, building both on the Mekong and its tributaries.

They said they would watch whether last year's pattern will repeat itself in the wet season this year.

Eyler said that usually the duration of water flowing into the Cambodia’s Tonle Sap, the largest freshwater lake in Southeast Asia, is five months, but last year the duration shortened to only five weeks due to water in Mekong dropping to its lowest level in the monsoon season. Without interference, the cycle of the Mekong season is five months of wet season and seven months of dry season.

The Mekong basin has the world’s largest freshwater fish catches: in Cambodia’s lake alone it is estimated to be 500,000 tonnes annually, 450,000 tonnes in Vietnam, 300,000 tonnes in Thailand, while catches in Laos are valued at around 5 per cent of country’s GDP.

Dam buildings have affected the ecological system such as fish migration and sediment distribution, Eyler added.