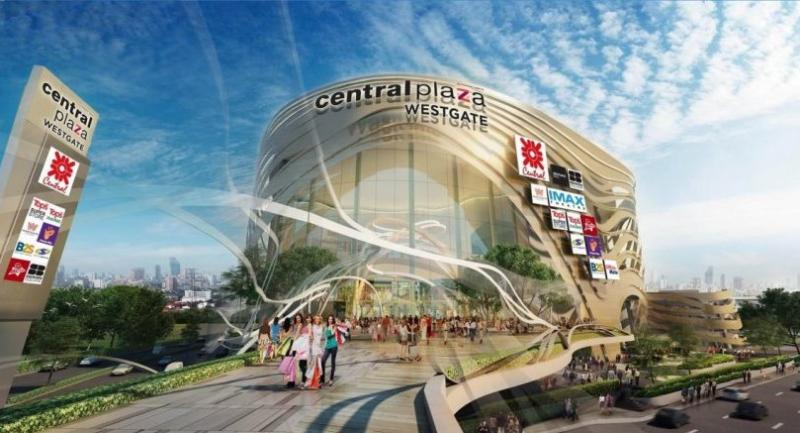 'CentralPlaza WestGate' is touted as the super regional mall of South East Asia.

The largest IKEA store, with a new design, will open on March 15 in Watergate. CPN is investing over Bt120 million in marketing budget to create ‘Expand Happiness – Have a Big Life’ campaign, supporting the growth and urbanised lifestyle in the Bang Yai/WestGate area, which is fast on its way to becoming the ‘West Business District’ (WBD), hoping to attract customer traffic of over 100,000 people per day to the shopping centre and the IKEA store.

Bangkok and its suburbs remain the prime strategic locations, and intense competition can be seen. CPN sees the opportunities to penetrate into these high potential locations.

“We are the first major retailer to have developed mega projects in both eastern and western Bangkok as we foresaw the trend of urban growth spreading from the heart of the city to its outskirts. Today, our mega projects have achieved significant success. The most obvious example is CentralPlaza WestGate, the ultimate super regional mall in Southeast Asia, which is the best destination for everyone in the family and the largest gateway for western Bangkok. Today, if someone mentions the word ‘WestGate’, most people will think of Bang Yai and of us,” he said.

“The WestGate area has become a prime location, with great capacity in various aspects such as urbanisation, the size of the local population, purchasing power, over 40,000 residential project units, the government’s infrastructure projects and transport networks etc. Upon the arrival of IKEA Bangyai at CentralPlaza Westgate, CPN has been talking about plans to cooperate with IKEA since the start of the CentralPlaza WestGate development. It is a great honour that IKEA, the world-class furniture brand, has chosen to develop its best and newest design store to connect with our shopping centre. The new IKEA store is not only the largest and the latest design in Thailand, it is also the biggest IKEA store in Southeast Asia, with a total area of over 50,000 m2. It includes eight entrances and exits (connecting to CentralPlaza WestGate on three floors), with a total of 29 checkpoints located on every floor for shopping convenience. Convenient transportation connects all routes together: the MRT Purple Line, buses, a pier, the ring road, expressway and motorway. In addition, our shopping centre and IKEA both have parking areas that can accommodate each other’s customers.” Nattakit added.

He said that the partnership between CentralPlaza WestGate and IKEA Bangyai is creating the phenomenon of ‘Big Bang Magnets’ as each is a magnet with the potential to complement each other in three major aspects:

Second, CentralPlaza WestGate is outstanding in fulfilling all the needs and lifestyles of its customers as a 'Center of Life' that offers an extensive range of products and services. The arrival of IKEA will further extend the continuity of the seamless shopping experience through connecting points between the two shopping venues and customer journeys that complement each other. The customers can spend time, eat, drink and entertain themselves and continue on to look for home products and furniture shopping all on one trip.

Third, CPN will introduce the ‘Expand Happiness – Have a Big Life’ campaign to further complement its concept, which encourages everyone to ‘Have a Big Life’. CPN is holding special promotions together with IKEA by bringing signature events that will be held at the IKEA Bangyai opening ceremony to join CPN in the campaign. One such event is ‘Ninja Maze…The Big Adventure Presented by EST COLA’.