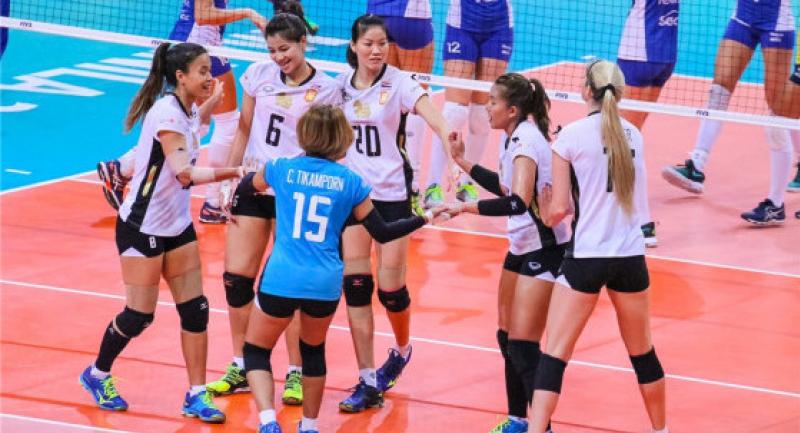 Asian Club champions Bangkok Glass fought hard against Rexona-SESC Rio, but went down 19-25 15-25 20-25 to the Brazilian side in the 5th-8th playoffs of the 2016 FIVB Volleyball Women’s Club World Championship at the Mall of Asia Arena in Manila, the Philippines on Saturday.

Monique Pavao made 13 points, built on 10 kills, while Anne Bujis added nine, and Gabi Guimaraes and Carol da Silva each had seven markers for the team from Rio de Janeiro, which will face the winners between home team PSL-F2 Logistics Manila and Hisamitsu Springs Kobe for the fifth spot on Sunday.

Wilavan Apinyapong led the way for Bangkok Glass with 10 points, all from spikes.

On Sunday, Bangkok Glass, which suffered three straight losses in their Pool B encounters to Swiss champions Volero Zurich, Japan’s Hisamitsu Springs Kobe and VakifBank Istanbul from Turkey, will square off against the losers of the game between home team PSL-F2 Logistics Manila and Hisamitsu Springs Kobe.

Rexona-Sesc Rio players Gabriela Guimaraes (Gabi) and Fabiana Oliveira (Fabi) admitted that it was difficult to play against the defence-oriented Bangkok Glass side, but the two key players agreed that sheer concentration was their key to victory.

Gabriela Braga Guimaraes, Rexona-Sesc Rio player: “It was a hard game because Bangkok Glass had good service and had great ability to challenge us. No.8 (Wilavan Apinyapong) is amazing and such a good player.

“We had a lot of mistakes on the third set. We can’t play like this. We need to have fewer mistakes as possible. We have a hard match tomorrow, so hopefully we can win because we want to win fifth place in the tournament.

“It’s really difficult to attack because they have amazing defence all the time. We need to improve more and more, dig balls. It’s good for us to play a team like that because, normally, we play taller teams like VakifBank and it’s a difficult match. They are so quick and so we needed to focus all the time. For us it’s really a good opportunity to have a different type of opponent. They put much energy in the third set. I hope we can play better.”

Fabiana Oliveira, Rexona-Sesc Rio player: “My team played huge because concentration was there. The Thai players were active and moved all the time. We had good concentration, good serves and good blocks. We lost our concentration in the third set.”

“We are not yet sure whether we play Japan (Hisamitsu Springs Kobe) or the home team (PSL-F2 Logistics Manila). I hope my team fight again in our final match. We need it more for tomorrow’s match. It’s very important for us.”

Bangkok Glass head coach Kittipong Pornchatyingcheep said, “The first set against Rexona was okay. Everybody in our team played okay, even good. But Rexona are a very good team. We just had some few problems with our reception, but I'm still happy that my team played professionally.

“Maybe we will play with Philippines (PSL-F2 Logistics Manila) tomorrow (Sunday). The Philippine club team are a good team with many fans.”

Team captain Pleumjit Thinkaow said, “Today, I think our reception was not good and also the serve was not good. We can’t receive so we can’t do anything. We are ready for either Hisamitsu or PSL-F2 Logistics, so we have time to play better for our last game.”