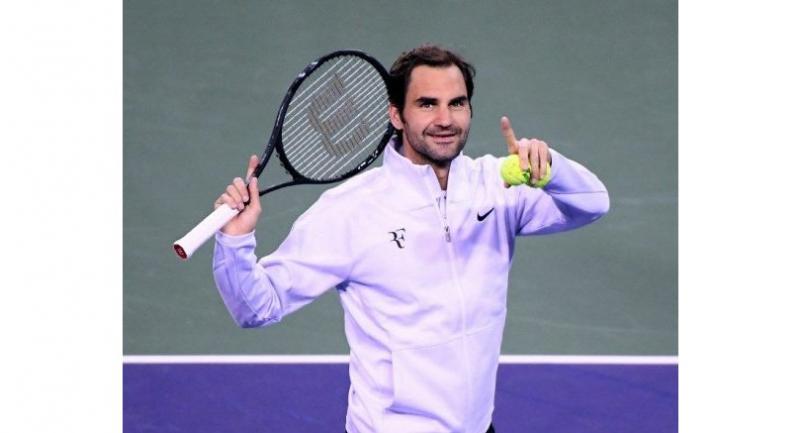 Roger Federer of Switzerland celebrates his win over Hyeon Chung of South Korea by tossing by hitting tennis balls into the crowd during the BNP Paribas Open at the Indian Wells Tennis Garden on March 15, 2018 in Indian Wells.

Defending champ Roger Federer equalled his best start to a season with a 7-5, 6-1 win over Chung Hyeong to book his spot in the semi-finals of the Indian Wells Masters on Thursday.

Federer, who is seeking a record sixth Indian Wells title, extended his win streak to 16 straight matches, matching the start he had to the 2006 ATP calendar season.

He clinched the victory on the second match point when he blasted his 12th and final ace of the contest.

Earlier this year he defended his title at the Australian Open, picking up his 20th Grand Slam win.

Last month he claimed his 97th singles title with a victory in Rotterdam which helped him regain the world number one ranking and become the oldest No. 1 player in ATP history.

And this victory guarantees he will hold onto the top spot after Indian Wells.

This was the first match between Federer and Chung since the semi-finals of the Aussie Open when the Swiss was leading 6-1, 5-2 and Chung was forced to retire with a foot blister.

The bespeckled Chung dropped to 15-6 on the season as he was appearing in his fifth quarter-final in six tournaments this year.

Federer said he plans to get ready for Coric the same way he prepared for Chung.

"He plays similar to Chung," Federer said. "A great mover and has got a world of confidence.

"I got to play aggressive tennis as much as I can. Pretty simple, not always easy to do."

Despite the windy conditions, Williams improved to 5-2 on the season, including a third round win over sister Serena, who was making her return to the WTA after having a baby.

Venus, who at 37 is the oldest player in the women's draw, has played sparingly this year but is just beginning to step up her game.

"We've had a lot of great matches," Williams said of playing Suarez Navarro. "I was glad that I was able to close it out."

She dominated Suarez Navarro, who became increasingly frustrated and had to call her coach a couple of times to come down to the court in between sets for advice.

Wiliams is back in the semis in the California desert for the first time since pulling out before a semi-final match against Serena in 2001, with an injury.

Although she skipped the event for many years, Williams said she recalled her earliest appearance fondly.

"This was my first breakout tournament when I was 16," Williams said.

Williams improved to 6-3 lifetime against the 29-year-old Suarez Navarro as the two veterans faced off for the first time since the round of 16 at last year's US Open.

Williams, who is seeded eighth, will need that experience when she takes the court in the next round against Russian 20-year-old Daria Kasatkina who has been jackhammering Grand Slam champions for the past year and rolling over top 10 players this week in Indian Wells.