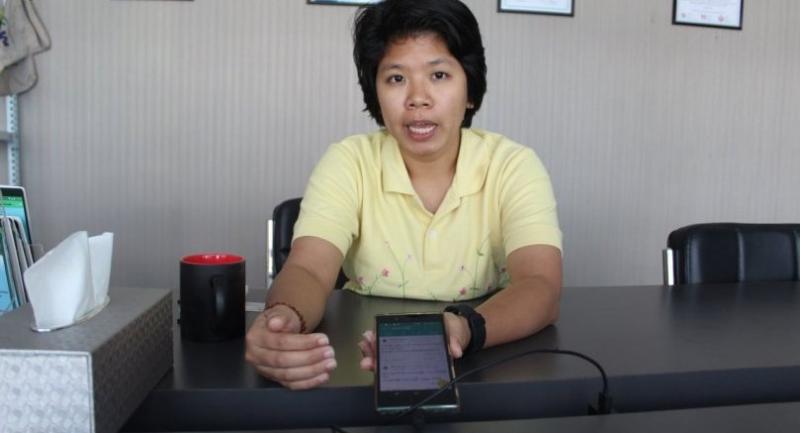 AMID surging demand for technology in Myanmar’s agriculture sector which involves a majority of its population, young entrepreneurs at Greenovator Co have set their heart on playing a leading role in the nation’s agri-tech, according to Yin Yin Phyu, the firm’s co-founder and director of operations.

Yin Yin Phyu said in an exclusive interview with The Nation that the firm would double its efforts to reach out to hundreds of thousands of farmers across the country.
Thein Soe Min, the firm co-founder, mainly works on adding innovative features to its landmark product “ Green Way mobile application”.
“We are the leading agri-tech organisation in the country with more than 100,000 farmers connected with over 2,000 experts,” she said.
“We aim to double our user base to 200,000 by the end of this year, and also have an ambitious target of serving around 2 million farmers over the next three years.”
According to the executive, their knowledge-sharing platform has covered the farming community in 329 townships across Myanmar. More than 95 per cent of the registered users on the platform are farmers while the rest are experts, agronomists and observers.
The firm was established in May 2011 by two close friends who graduated from Yezin Agricultural University. They started with a blog and a website to share best practices in farming with a particular interest in organic farming. In the early years, the firm’s performance was very slow due to insufficient funding, time constraint and the lack of local talent.
In the second half of 2015, the two quit their jobs at non-government organisations to fully concentrate on Greenovator Co.
“In September 2015, we shifted our focus to develop a mobile application, and have been expanding our team. As a result, we have gained more trust from our partners and the farming community,” said Yin Yin Phyu.
“As a social enterprise, our business model generates income from providing agricultural services such as consultancy, research and translations to INGOs, NGOs and enterprises.”
Using the knowledge, experience and income gained from the services, the firm launched in May 2016 the Green Way app, which has been downloaded more than 100,000 times, and is extensively shared through Zapya, an offline data sharing app. In this respect, Yin Yin Phyu expects real users to be double or even triple of the downloaded rate.
“Our app is the digital linkage between farmers and agri-experts across the country. We can offer help to agricultural projects by providing consultancy services,” she said.
To her, the firm’s consultancy offerings include farming advice (online and offline), project management, agri-business related consultations, resource mapping, collecting surveys and conducting comprehensive research on a particular topic and study area upon a client’s request.
“Our clients include organisations and companies wanting to disseminate information and services through our app, which in turn enables us to empower small-scale farmers in Myanmar to improve their livelihood,” she said.
Another source of funding comes from grants by international organisations, such as Unesco, GIZ, PWC, Care International, GSMA, UKAid and fhi360.
The platform will boost farmers’ knowledge in order to improve capacity in project areas. It will include good agricultural practices, post-harvest technologies, sustainable rice platform standards, how to promote value-added farm produce and ensure stable income for farmers.
Currently, the firm is partnering with the Agriculture and Market Information Agency to provide real-time market prices of more than 400 agricultural commodities at 22 wholesale markets across Myanmar. Registered users can easily access updates of market prices and new developments in the agriculture sector on the firm’s website and mobile application.
According to the statistics, the majority of the registered users live in the Magwe region, followed by the Sagaing and Ayeyarwady regions, said Yin Yin Phyu. She also expects rising interest in the Yangon and Mandalay regions.
“We are now raising the awareness of farmers on how to effectively use the app by joining agri-fairs and conducting focused group discussions on the ground. Every day, our team calls up 10 farmers and experts for their feedback,” she said.
“We also cover livestock… around 30 per cent of our contents focus on ways to improve livestock in rural areas. There are also audio versions of popular contents on our platform, as some farmers cannot read. We will include ethnic language versions to reach out to farmers in those provinces.”
During the interview, Yin Yin Phyu took pride in reminiscing the firm’s success story. In 2016, Greenovator finished as runner-up for the Myanmar Young Social Entrepreneur Award. A year later, the firm was nominated as the local winner for 2017 A2030, organised by UN Development Program and Impact Hub Yangon.
In July 2017, the two co-founders were awarded the most outstanding agricultural alumni.
She considers the signing of an agreement in 2017 with Myanmar’s Department of Agriculture to use the Green Way app as one of the department’s agricultural tools a significant milestone for Greenovator.
The agreement ensures real-time government announcements and collaboration with the firm’s team for visits to farmers on the ground.