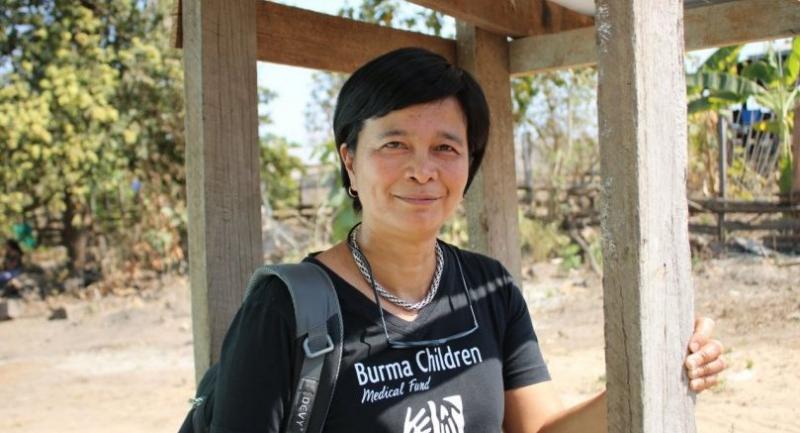 By Jim Pollard
The Nation

IN A factory in the north of Perth, a group of elderly West Australians make and assemble sturdy wheelchairs, which are sent to needy kids around the world.

These people are retirees – many of them volunteers in their 70s – happy to do occasional manual work for a charity that can transform life for disabled children in developing countries.

Just this week another container load of wheelchairs was loaded and dispatched to Thailand. The destination is a famous clinic on the Thai-Myanmar border.

The container is the second sent this year to Kanchana Thornton, a Thai-Australian nurse who has been doing inspirational things for some of the region’s most needy kids for over a decade.

Some of these wheelchairs have in the past gone to poor Thai families, but most are now destined for remote villages in Karen State in eastern Myanmar.

Thailand has very serious wealth inequality, but levels of poverty and hardship are far worse in ethnic areas across the border.

lowest outlays on healthcare anywhere in the world, and a ratio of health workers well below the global average. In 2013, just over 3 per cent of Myanmar’s budget was allocated to health, while funding for defence was more than 20 per cent.

Spending on health has risen since the Thein Sein administration, but

it is still way below demand – the country had one of the highest rates of out-of-pocket (private) spending on health in the world (82 per cent of total health spending) in 2015.

Cities like Yangon and Mandalay have undergone a boom in recent years, thanks to improved relations with the West and a surge in foreign investment. But there has been

limited change in ethnic areas in the north, east and west – particularly those plagued by conflict.

A year after Aung San Suu Kyi’s National League for Democracy took power in 2015, the Tatmadaw retains control of key ministries and is showing no sign of cooling military

campaigns that have displaced millions over the past 30 years. Her push for peace has made minimal progress – while the children of Myanmar pay a dreadful price for the military’s desire to crush their ethnic rivals.

Unicef, the UN’s agency focused on child welfare, sought to draw attention – prior to the second Panglong peace summit in May – to the plight of 2.2 million children suffering because of protracted crises in Rakhine, Kachin, Shan and Karen states.

“Myanmar faces a real challenge in ensuring that children everywhere – not just in urban areas – gain from the country’s rapid development,” Forsyth said.

Families in IDP camps were

facing great hardship, he said. Many UN and non-government organisations were working hard to help these

“But we need to solve some of the root causes of this problem.”

Forsyth said the 2014 census showed that up to 150 children under the age of five die every day in Myanmar, mainly from birth complications and infectious diseases. Nearly a third of all kids suffer

Landmines are still a big problem. Nine of country’s 14 states and

divisions are contaminated with mines or remnants of war from past or ongoing conflicts. Unicef says every three days a person is a victim of

landmines, and on average, one of those three is a child.

AT the Mae Tao Clinic in Mae Sot, the lack of progress in the peace talks and lingering hardship in remote areas has surprised no-one. Ethnic groups have known for years that the military are indifferent to their

Surveys by groups such as the Backpack Medics a decade ago indicated maternal and infant death rates as bad as areas in war-torn Africa. The figures have improved, but are still among the worst in Asia.

Nonetheless, there have been glimmers of hope. Kanchana, the BCMF director, is spending more time in Myanmar, meeting with

doctors and medical staff at various hospitals and clinics.

“People are much more open to discuss their situation,” she said. “They want to talk to you about getting help. Hospital doctors are also going to remote areas – on days off, to assess and treat patients.

“The medical profession is willing to talk, so we’re trying to work with them. And they’re happy to work with us.”

The BCMF has set up an office in Hpa-an, the capital of Karen/Kayin State, to build local capacity and work with partners such as the Ananda Myitta Clinic in Hpa-an, Karen State, and Mawlamyine Christian Leprosy Hospital in Mon State.

On the Thai Burma border more than 100,000 Burmese flock to the Mae Tao Clinic every year, as it treats most patients for free – migrant workers in Mae Sot as well as refugees from border camps such as Mae La, plus poor Karen and others from many parts of Myanmar.

For the past 10 years, the BCMF has sent a vanload of sick children to hospitals such as Suan Dok in Chiang Mai for surgery, which has often been lifesaving. It pays the cost of logistics and operations then brings the kids and their parents back, once they have recuperated at the Fund’s ‘Patient House’ in Chiang Mai.

Dr Cynthia, the BCMF and Mae Tao staff moved recently to new buildings further from the city centre. The Bt300 fare to get there, from Mae Sot town, has reduced the number of outpatients. But demand for free and affordable medical care from people in Myanmar has not abated; facilities over the border remain very basic and clinics often lack proper equipment and drugs.

The BCMF is now a major part of the clinic’s services, with 22 staff, including foreigners, Karen and Burmese interns, who help raise over half a million dollars in funds every year – from the US, Australia, Switzerland and Thailand, as well as donors in the UK and all around the world.

It operates five vans, and “every van is full and there are waiting lists for patients” wanting treatment, Kanchana said. They also support surgical projects, such as Operation Smile, eye screening, health education and stationary for “jungle schools”, give out mosquito nets, and of course, distribute the wheelchairs from Perth.

The big news is some cases are being referred back to Myanmar. Adults with heart problems have been sent to a cardiac surgeon in Yangon, while “simple cases” go to the Leprosy Hospital in Mawlamyine.

“But we [BCMF] help pay with surgical costs,” she said.

Kanchana, it seems, has found her life’s calling. Born in Bangkok, she

did a nursing degree and graduate diploma in child and family health at Sydney’s University of Technology after moving Down Under at the age of 14.

In 2001, following stints working at some of the biggest hospitals in Sydney she returned to Thailand with her husband Phil. She then travelled back as an Australian Volunteer, a vocational scheme funded by the Australian government’s AusAID that helped send hundreds of professionals to positions of need in the developing world each year.  After a few years at the clinic, there were so many complicated long-term medical cases she felt compelled to stay.

She said at that time: “There are many kids that need operations and it’s hard to organise transport to Chiang Mai. I just asked for an extension [as a volunteer], thinking ‘What will happen to all these kids if I go back?’

“I don’t think it’s fair to give them hope and dump them when you can resolve their problems.”

Thai health officials were understanding, she said. “I think they realise the clinic takes a lot of burden of patients that would otherwise go to their hospital and would be a big cost for them. Staff at the hospitals in Chiang Mai have a good understanding of the patients’ situation, she said.

“It’s the Thai authorities who let it happen by letting me take these kids to Chiang Mai, to let these kids have a chance to have a healthy life. And it’s not a big burden to the local

Life and death decisions are made on a regular basis. Sometimes it comes down to money. BCMF is estimated to have saved about 2,000 children’s lives, but Kanchana realises there is a limit to what they can do.

“If an operation is too complicated and costs a lot, we can’t do it. It’s all due to the funding. We talk to the doctors in Chiang Mai and if the

prognosis is good, we try to do it.”

Mae Tao founder Dr Cynthia has won many awards, but the BCMF head has also been recognised. In 2007, Kanchana received the Paul Harris Medal from Rotary for her distinguished service. Then last month, she won US$50,000 (Bt1.7 million) from The One, a humanitarian award by Rotary International District 3450 in Hong Kong – money she intends to spend on solar panels and equipment for clean-water for “jungle

clinics” in Ler Per Her and other remote villages in Karen State.

But seeing chirpy kids and happy families seems to give her the greatest lift. “A little help can change their life,” she said.

With the Tatmadaw seemingly set on maintaining its power and influence, the border clinic and its vital service for kids could remain busy for many years yet.