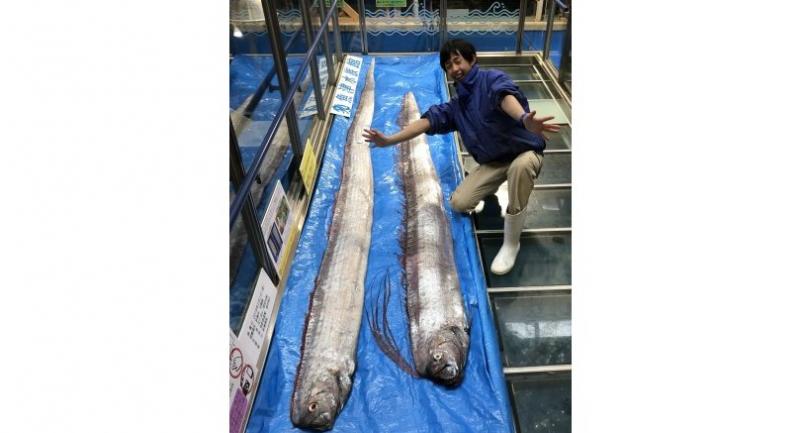 This handout picture from the Uozu Aquarium taken on February 2 and released on February 26 shows two giant oarfish displayed at the aquarium in Toyama Prefecture. //AFP

Tokyo - Two rare oarfish, giant deep-sea serpents long believed by locals to be a harbinger of earthquakes and tsunamis, have been caught off the Japanese island of Okinawa.

Fishermen were stunned to find a pair of the silvery fish -- the bigger one measuring four metres (13 feet) -- alive in their nets late last month as the number of sightings of the mysterious creature in Japanese waters continues to rise.

"I had only ever heard stories about this fish," the Yomitan fisheries cooperative association's Takashi Yamauchi told AFP.

"When I saw them at the port, I was quite shocked."

The fish, caught off Okinawa's southwest Toya port on January 28, both subsequently died.

More than 12 elusive oarfish -- known in Japanese as "Ryugu no tsukai" or the "Messenger from the Sea God's Palace" -- have washed up on shores in Japan over the past year.

Oarfish live between 200 and 1,000 metres below the surface of the Pacific and the Indian Oceans and have serpentine bodies with red fins that give them a dragon-like appearance.

Japanese folklore has it that they move to shallower seas before underwater earthquakes, possibly due to electromagnetic changes that occur with tectonic activity.

Local media reported that a spate of sightings preceded the 2011 earthquake and tsunami that left about 18,500 dead or missing in northeast Japan, strengthening the myth.

The recent oarfish discoveries have sparked renewed debate on social media about impending doom, although scientists dispute such claims.

Although rarely caught in fishing nets, six oarfish were recently captured or found beached in Toyama on the western shores of central Japan.

The pair netted off Okinawa died en route to an aquarium before fishermen ate part of a fin as sashimi -- although fisheries officials noted only a portion that had ripped off while loading one of the creatures onto the boat had been sampled.