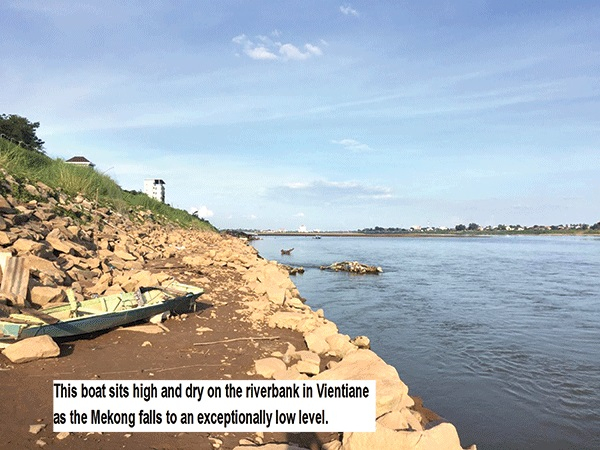 The Mekong, one of the largest rivers in South East Asia, is experiencing a historically low level, and Vientiane residents whose livelihoods depend on the river are struggling to sustain their businesses.

Mr Xaysana Bounyalath, who has been fishing in the river near Vat Chan since 1975, said yesterday he had never known the water level be so low at this time of the year.

“As far as I am aware, the river is at a record low this rainy season,” he said, adding that the situation was making it hard for him to earn a living as a fisherman.

He said fish stocks in the Mekong were declining, and he believed that the abnormal water level was the cause of the problem.

A senior official at the Vientiane Water Supply Enterprise told Vientiane Times last week that the low level of the river would disrupt the supply of water in Vientiane because the pumps that are stationed along the riverbank could not pump up water at their full capacity.

The Mekong River Commission (MRC), which monitors the flow of the Mekong, announced last week that the level had fallen below the historical minimum.

The Commission reported that the water level in the Mekong during the early flood season from June to July was lower than that recorded in 1992, which saw the lowest flow on record.

“From the upper reaches of the lower Mekong basin in Thailand’s Chiang Saen to the Lao PDR’s Luang Prabang and Vientiane and further down to Thailand’s Nong Khai and Cambodia’s Neak Luong, the water levels are all below those that occurred in 1992, which was by far the year with the lowest flow on record,” the MRC said in a media statement.

The MRC claimed that there were a number of factors which may contribute to the low water level, saying data shows that the contribution of water from Mekong’s tributaries and upper reaches was abnormally low in June and July compared to previous years.

The Commission, which is a water diplomacy platform representing Cambodia, Laos, Thailand and Vietnam, also observed that rainfall has been very deficient in the Mekong basin since the beginning of this year.

In the upper reaches of the lower Mekong basin, Chiang Saen had the lowest rainfall in June compared to other areas downstream, the MRC said, adding that the average rainfall in the Thai town in June was only about 67 percent of the total amount of monthly rainfall in June 2006-2018.

The average lower-than-normal rain volume in the lower Mekong basin during June-July could also cause deficient groundwater in the region. This means there is insufficient groundwater contributing to the Mekong mainstream, the MRC said.

The Commission said last week that China had renewed its commitment to share hydrological data with the MRC, adding that this agreement would enable it to keep a close watch on water fluctuations in the Mekong.