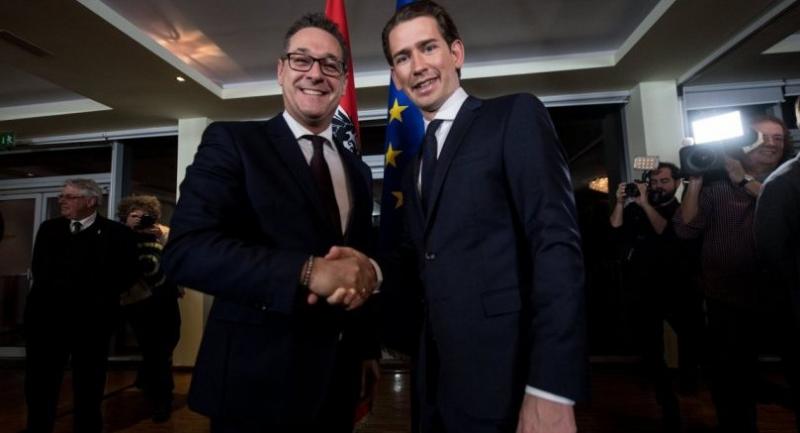 Once officially sworn in next week, Kurz will be chancellor and his People's Party (OeVP) will occupy the finance, economy and justice ministries, among others.

The head of the populist FPOe, Heinz-Christian Strache, will be vice-chancellor and his party has secured the interior, defence and foreign ministries.

Here are the main FPOe figures:

Strache flirted with neo-Nazism in his youth but over the years has mellowed and now aged 48, besuited and with severe new glasses, portrays himself as a mature statesman rejecting extremism.

When he took over the FPOe in 2005 at 35, the party created by ex-Nazis was a mess. But gradually, with deft use of the internet, it has gone from strength to strength.

Remaining fiercely nationalist, he dubbed German Chancellor Angela Merkel in 2016 "the most dangerous woman in Europe" and says Islam "has no place in Austria".

Herbert Kickl, 49, the FPOe's diminutive and sharp-tongued general secretary since 2005, has long been seen as the eminence grise and the brains behind the party's rise.

Kickl used to write speeches for Strache's controversial predecessor Joerg Haider and has been responsible for some of the party's borderline racist slogans like "More courage for our Vienna blood".

He is credited with masterminding the shift to more subtle messages and winning over voters alienated by globalisation and fed up with the cosy centrist establishment that has run Austria for decades.

At the same time Kickl appears not really at home at the party's smokey, flag-waving, beer-swilling meetings -- where Strache is king -- and will now turn his brainpower to the interior ministry.

The FPOe came very close in 2016 to winning the largely ceremonial Austrian presidency when its candidate Norbert Hofer surprised many -- including some in his own party -- by proving a hit with voters.

In his polished campaign, based around the slogan "Unspoilt, honest, good", the softly-spoken aircraft engineer with a disarming smile presented himself as the FPOe's friendly and moderate face.

But behind the grin lurks a steely, true-blue ideologue -- his mask slipped a bit in the final stages of the election -- and his success was such that he has been touted as a possible successor to Strache.

Hofer, who walks with a cane after a paragliding accident and who takes a keen interest in disability issues, will now be infrastructure minister -- and remain a potential future leader.

Hofer had been rumoured to be in line for the foreign ministry but in the end Karin Kneissl, 52, a respected and multi-talented career diplomat who speaks Arabic, Hebrew and Hungarian, was tapped.

While not a member of the FPOe, Kneissl shares many of its views, talking tough on immigration and the European Union.

After the Brexit vote in 2016 she dubbed European Commission President Jean-Claude Juncker "boorish" and "arrogant".

Strache has said she could become "the female Kreisky" when it comes to "promoting Austria abroad", referring to Bruno Kreisky, chancellor from 1970-83 and the towering figure of postwar politics.

But perhaps to soothe any worries in Brussels, particularly given the FPOe's ambivalence about the EU and with Austria holding the EU presidency in the second half of 2018, Kurz's right-hand-man is set to retain responsiblity for European affairs.//AFP