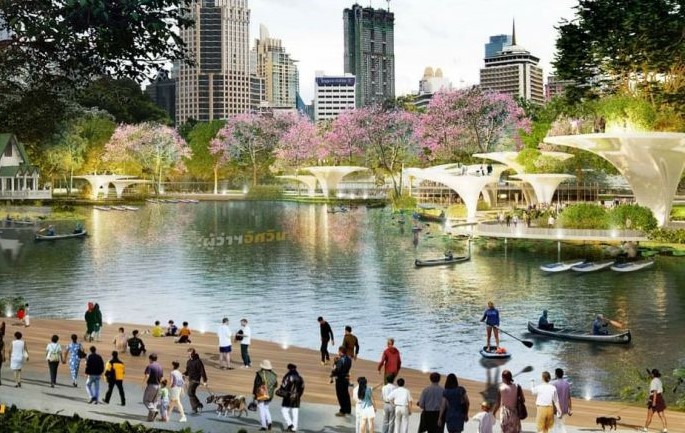 BMA aims to transform Lumpini Park into a world-class landmark

In a Facebook post, he said: "If you think of an area with green plants in a wide garden with a large pond, where we can stand and breathe fresh air, relax, exercise, meet and take part in activities in the city, is convenient to visit, probably one will not think beyond a park".

A city with a big park symbolises the quality of life of the city in many countries such as Central Park in New York, Hyde Park in London, Garden by the Bay in Singapore, and they are known all over the world, he said.

Lumpini Park was the first public park in Thailand. King Rama VI gave up the royal garden land to serve as a botanical garden, with more than 360 rai of green space, tracks for running and cycling, areas for exercise, and also a green bridge, and a route connecting to Benjakitti Park as well. The park will celebrate its 100th anniversary in 2025.

The Bangkok Metropolitan Administration (BMA) has plans to improve the park's historical value, showing the identity of the city just like the world's top parks, and develop it into an area that everyone can use equally.

There will be an adjustment of the road and walkway from the entrance of Rama 6 to Radio road, the overhead power cables will be moved underground and corridor space will be increased.

The highlight of the development is to add a connection point for Lumpini Park, Green Bridge and Benjakitti Park, bringing it to life with walkways and bike lanes to provide space for everyone, of all genders, ages and people with disabilities to be able to use the park in accordance with the universal design concept, Aswin said.