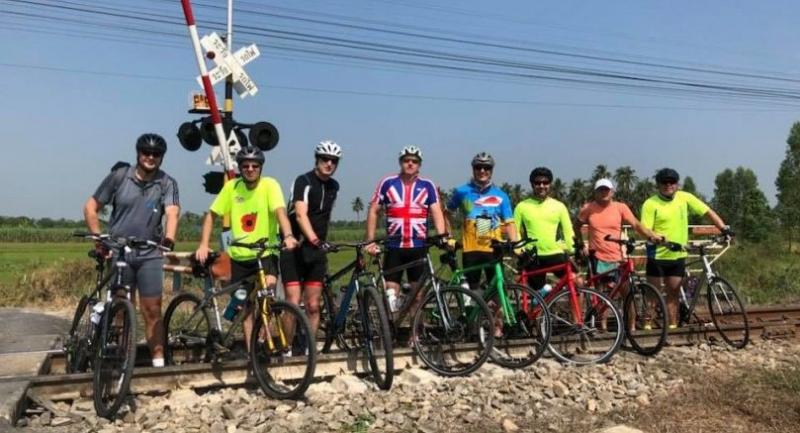 At the break of dawn today, a team of 10 cyclists from the British Embassy Bangkok embarked on a ‘road trip’ that will have them cycling 375km along the route of the infamous “Death Railway” from Bangkok to the Thai-Myanmar border at 3 Pagodas.

All money raised from donations and sponsorship will be split between 4 worthwhile charities: Thailand Veterans General Hospital, Action 4 Diabetes, The Royal British Legion and Breast Cancer Research. Each charity has a personal value to each cyclist and seeks to benefit people in the UK, Thailand and Myanmar.

Every year, The British Embassy Bangkok supports a number of local community organisations in Thailand. Last year, Embassy colleagues helped build facilities for the children at the Klong Toey Foundation for Slum Children and Wat Pathum Wanaram School and assisted with the cats at PAWS, a not-for-profit organisation dedicated to improving the lives of Bangkok’s stray cats.

You can track the team’s progress on Twitter @BKK3PC and Facebook @3PagodasChallenge. Further donations can be made via their Just Giving page or by contacting Sebastian Kay directly on Sebastian.Kay@fco.gov.uk.