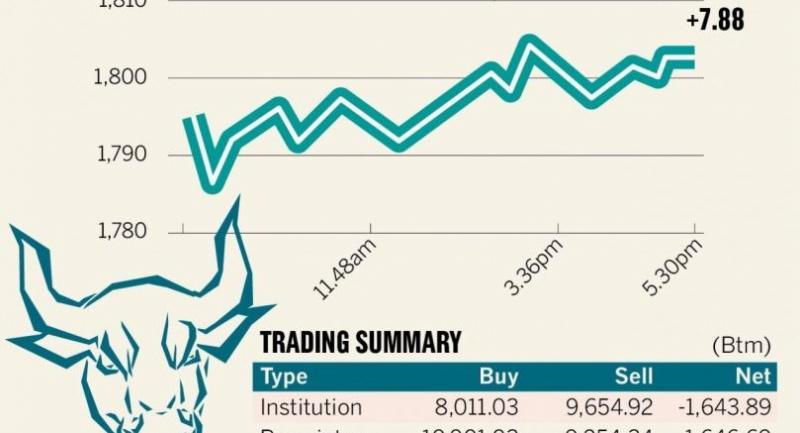 ANOTHER trading record toppled in the Thai stock market yesterday when the benchmark index pushed deeper past 1,800 points, and investors have expressed confidence it will hit 1,900 by the end of the year.

Isara Ordeedolchest, senior vice president for SCB Securities, said the SET Index had made corrections on its approach to 1,800 points, and any pullbacks were likely to be short term amid a bright long-term outlook.
In the short term, the SET Index could drop to 1,740 points as a result of market corrections on any sell-down by long-term funds, but he expressed confidence about a 2018 target of 1,900 points.
“The Thai stock market is not a bubble, despite the fact that it is trading at two times above the normal level, as the Thai economy is expanding with recoveries in both domestic consumption and external factors,” Isara said.
A stock market bubble occurs when demand for shares drives their prices and the index to levels beyond any accurate or rational reflection of their actual worth.
Given that the US economy is showing consistent growth with an acceleration in inflation expectations, the federal funds rate - the US benchmark rate – is expected to rise four times this year against market expectation of three times, Isara said. The European economy is recovering, while Japanese consumption expanded better than expected.
However, it is worth to keeping an eye on China, where the economy is slowing down under the direction of the government’s March policy announcement. If the country adopts more monetary tightening, the global economy and Thailand could be affected.
Thailand's economic growth is projected at 4 per cent on the back of consistent export expansion and recovery in domestic consumption and public investment. One concern is over the country's general election, which has been promised by the government for no later than early 2019.
Meanwhile, there remain concerns over apparent bubbles in stock markets across the world.
Isara said that a bubble would likely occur first in bond markets and this impact could be felt later in the stock markets.
Even though it is possible for the US stock market to make a 10 per cent correction, he believed such a sell-down would not affect the Thai stock market, given its strength with forward price to earnings ratio of 14-16 times.
Asia Plus Securities expected the Thai stock market's corrections to continue on pressure from blue chip reversals and the SET Index could stay below 1,800 points for a period.
However, ICT and energy groups have become resilient against the market corrections.
Foreign investors switched to net sellers of stocks in the region after a nine-day net buying streak, with net sales of US$493 million. Most of the foreign sales were centralised in stock markets in East Asia.
Thailand faced net foreign sale of stocks worth about US$135 million, or Bt4.4 billion.