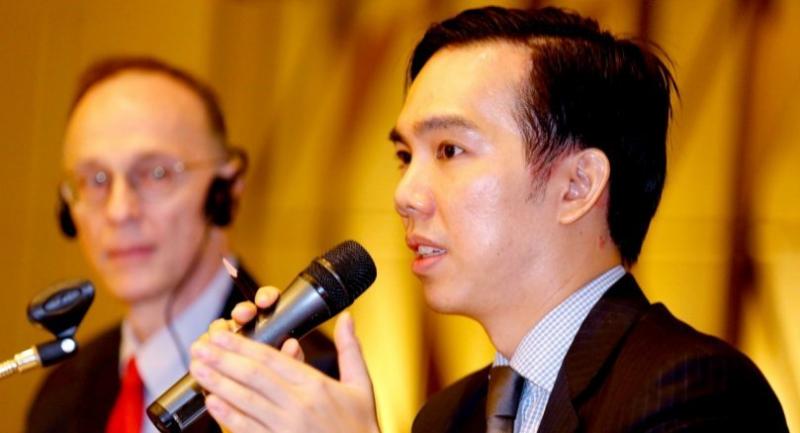 INEQUALITY IN education remains a critical issue for Thailand, which can be tackled by consolidating small schools, the World Bank has suggested.

The bank believes such a measure would help improve the quality of education and in effect narrow the widening income disparity. Thai economic growth this year has been forecast to slow to 3.8 per cent, according to the World Bank’s Thailand Economic Monitor released yesterday.
The level of inequality in Thailand, as measured by the Gini coefficient, is comparable with peers and it remains an issue that should be a national priority, the World Bank report said on Thailand’s challenges and opportunities in enhancing human capital and reducing inequality.
“The income inequality gap in the last 15 years has narrowed, but it has been flat or has increased over the past few years,” said Kiatipong Ariyapruchya, World Bank senior economist for Thailand.
To address inequality, the bank has suggested that the government consolidate small schools nationwide in order to improve quality, he said.
Thailand spends annually about 5 per cent of gross domestic product on education, on par with some of the developed countries, he said.
However, productive spending has to be improved, the bank suggested.
There are too many small schools faced with the trend of a declining number of children and youth.
Poor families and households in the rural areas send their children to schools near their homes in order to reduce transport cost.
Small schools face shortage of teachers and educational equipment, resulting in poor PISA (Programme for International Student Assessment) scores for the children.
The bank pointed out that Thailand’s quality of education is lower than the Asean average.
In Thailand, a child born today will reach only 60 per cent of potential, in terms of productivity and lifetime income. “Unequal quality of education in Thailand is one of the biggest challenges, with poorer areas being under-served,” said the bank. There are approximately 1 million poor children currently getting inferior quality of education.

Due to under-resourced small schools, with inadequate infrastructure and educational materials, the 12.4 years of basic schooling expected for a child born today in Thailand is equivalent to just 8.6 years – a learning gap of 3.8 years, according to the World Bank.
“Sustaining the peace and quality of structural reforms will be crucial for reducing poverty and raising Thailand’s long-term growth path above 4 per cent in the face of demographic challenges caused by rapid ageing,” said Birgit Hansl, World Bank country manager for Thailand.
Currently there are about 334,000 classrooms nationwide, from kindergarten to grade 12 schools. Thailand could consolidate schools within a 10-20 kilometres radius, which would not much increase the transport cost for families, said Dilaka Lathapipat, World Bank human development economist. The consolidation could bring down the number of classrooms to about 259,000, he said. Then the number of teachers required would be about 370,000. “Currently there are over 400,000 teachers, which means we do not have a shortage of teachers,” said Dilaka. At many small schools, the average class size is 14 children, which is the smallest in the world, compared with 25 on average among developed countries, he said.
If school consolidation were to be implemented, the class size would increase to 25 children, he said.
Japan, which faces the problem of an ageing society, has gone through school consolidation and that resulted in higher PISA scores, he noted.
Since 1987, the numbers of children and youth have significantly declined, from over 18 million to 12.5 million last year and is estimated to be 10.5 million in the next 10 years. “The declining trend of children and youth population is obvious, but we never plan to do anything about school consolidation,” he said.
Meanwhile, Kobsak Pootrakool, minister attached to the PM’s Office, assured that the government has given priority to solving income inequality. There are many laws designed to empower the poor and people living in rural areas, which will come into effect in the next few months, he said. He agreed that Thailand needed to consolidate small schools.
Amid a global slowdown and elevated trade tensions, the Thai economy is projected to grow by 3.8 per cent in 2019 and 3.9 in 2020, according to the World Bank. Export growth is estimated at about 5 per cent this year. A one percentage point slowdown of the US economy would impact about one percentage point of the Thai economy, while a one percentage point deceleration in China’s economy would impact the Thai economy by 0.5 percentage point, said Kiatipong. Political uncertainty is also a risk to the Thai economy because it could delay pubic investment projects, he warned.
Despite external shocks to trade and tourism, the growth of the Thai economy is estimated to have accelerated last year to 4.1 per cent, the report says.
It proved to be resilient in the face of strong global headwinds due to strengthening domestic demand, stemming from an upswing in private consumption and private investment.
Investing in human capital and pursuing economic reform is critical for Thailand to become a high-income nation with equal opportunities for all citizens, the World Bank said.