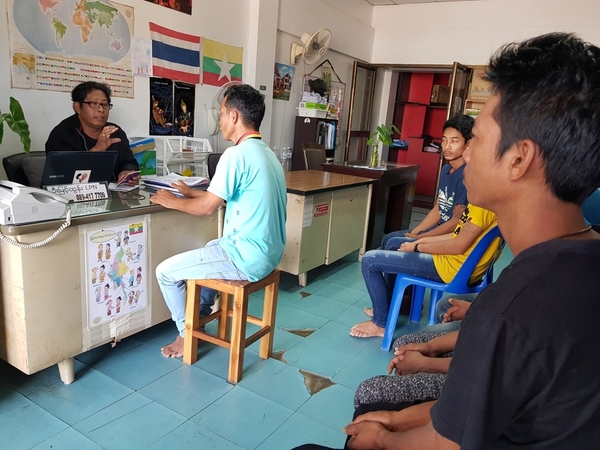 The company said it conducts constant surveillance to ensure good practices.
Under its Human Rights Due Diligence Process, the company said it analyses and assesses risks and impacts on human rights across business activities.
The announcement by CP Foods comes amid mounting pressure on the Thai government and corporates from the United States, which has threatened to cut Generalised System of Preferences (GSP) tax benefits worth $1.3 billion over labour rights issues.

Parisotat Punnaphum, CP Foods' executive vice president for human resource development, said the company was much concerned about slavery and human trafficking which are major global human rights issues. It also vowed to stand firm in combating all forms of slavery and human trafficking by preventing, mitigating, and solving any grave violations.
In 2019, CP Foods conducted the Human Rights Due Diligence Process. The salient human rights issues as a result of the assessment are working conditions, health and safety of employees, community health and safety, data privacy, use of illegal labour (child labour, forced labour and illegal migrant workers) in the supply chain, sub-contractors and suppliers’ health and safety and community safety and standard of living in supply chain, he said.
Parisotat added that once those risks had been assessed, the company would closely monitor them and they would be managed and mitigated systematically. Moreover, the Human Rights Due Diligence Process has been conducted regularly every three years, he added.
In October 2019, the company was ranked the third best company in the overall score by Seafood Stewardship Index, reflecting strong performance in most of the sustainability areas. In addition, the company got the highest scores in the areas of stewardship of the supply vhain and human tights as well as working conditions. This showed transparency and sustainable development in the company’s operation, he said.
“CP Foods adheres to all forms of transparent approaches to ensure human rights fundamentals, standards and welfare are met,” noted Parisotat, adding the company also associates with international labour institutions and civil society organisations such as the International Labour Organisation.
The company is committed to continuously supporting the drive to transform Thailand’s seafood industry, in order to achieve responsible sourcing of fishmeal, which is a raw material for shrimp feed, he said. In this mission, the company’s aquaculture business is collaborating with both national and international groups, including Thai Sustainable Fisheries Roundtable, Seafood Task Force, The Fishermen Life Enhancement Centre, Seafood Business of Ocean Stewardship, Global Dialogue on Seafood Traceability and Global Sustainable Seafood Initiative.
He added that the company continued to focus on human rights issues in the supply chain by providing training to business partners and encouraging its suppliers to adopting a similar stance under Thailand’s labour laws and international standards requirement.
The company has also teamed up with Thailand’s Department of Labour Protection and Welfare under “Joint Development Project for Suppliers to Achieve Thai Labour Standard” framework. The project aims to improve labour practices of its suppliers to ensure traceability and sustainability. It is also designed to upgrade workers’ living standards as well as fair treatment of all labour in Thailand.
“We try to strengthen competitiveness and win-win partnership with our suppliers, particularly medium suppliers and raw material traders in the supply chain including corn, cassava, palm oil, rice products and fish meal by promoting them to operate business legally, and responsibly, in line with labour rights protection and international principles,” Parisotat stressed.
CP Foods said it was obliged to responsible sourcing and traceability of key raw materials to achieve sustainable production. The policy has been implemented in line with the Sustainable Development Goals and the United Nations Global Compact.
The company has engaged with the Labour Rights Promotion Network Foundation (LPN). CP Foods’ workers can voice their concerns through the Labour Voice Hotline jointly developed with LPN. As a neutral party, workers can more freely express their concerns, opinions, recommendation and complaints.
“The Labour Voice Hotline helps the company to promote labour protection and a better quality of life for workers, and tackle any risks of human trafficking and forced labour,” Parisotat said.
CPF employs about 12,000 foreign workers under a memorandum of understanding between the Thai government and neighbouring governments such as Cambodia and Myanmar, according to the company.The company earlier said it would not be adversely affected by the US government’s warning to cut GSP. The GSP cut will come into force in April next year if the US is not happy with Thailand’s response on labour rights protection.