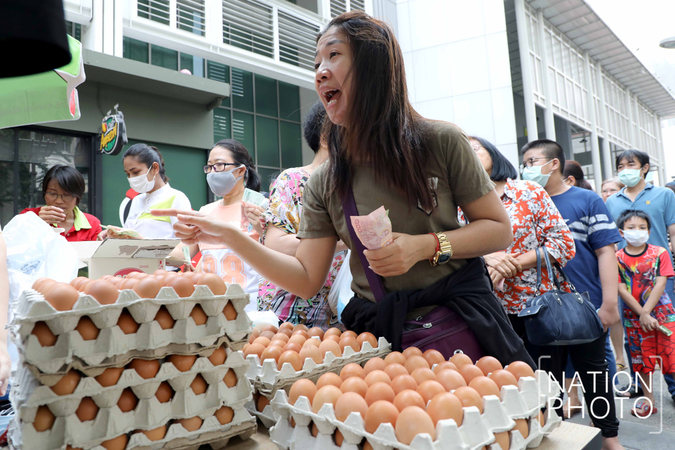 People queue up to buy eggs, face masks and other necessities provided by the Commerce Ministry's mobile unit in front of a Big C store in the Saphan Khwai area on Sunday. Face mask stocks are in short supply due to high demand, driven by public panic about the Covid-19 virus spreading. Nation Photo/ Kunlaphun Siripimamporn.

Thailand will fall into an economic recession in the first half of this year and the middle- and lower-income groups will be hard hit, an economist has warned

"There is high chance that the country will be in a technical recession -- contraction of the economy for two consecutive quarters," said Anusorn Tamajai, director of Economic and Business Research Centre at Rangsit University.

The Thai economy has been largely impacted by slower growth as the coronavirus has spread globally.

The Thai economy in the first quarter -- from January to March -- is expected to contract by 2 per cent year on year. The second quarter will also see negative growth, he warned. The Thai economy last year grew 2.4 per cent for the full year.

Middle-income and lower-income groups are expected to be hit hard as tourism and small business are severely impacted by the Covid-19 outbreak, he said. It is unlike the 1997 crisis when large businesses were hit as they borrowed too much, he said.

During the Asian financial crisis in 1997-1998, Thailand faced an economic crisis and growth contraction for four consecutive quarters.

He said that this year, recession will be less severe than in 1997-98, and added that projection is difficult while the virus continues to spread worldwide.

He said the government’s planned stimulus package may lessen the burden for people and small businesses in the short-term.

However, as the government has often launched stimulus packages, it may erode the financial position of the country in the long run. Thailand's fiscal base is not as strong as that of Singapore and Hong Kong, said Anusorn.

The government plans to hand out Bt2,000 each to low-income people, estimated to be about 14 million. Anusorn said to make it effective, the government should target those currently holding State Welfare cards and members of the National Savings Fund.

The stimulus may boost the economy by 0.015 to 0.03 percentage point, preventing it from contracting by more than two per cent.

He did not agree with any government plan to allow employers to delay their contributions to the Social Security Fund. The government should find other ways to lessen cost for business, he said.

The government can boost confidence by making sure the government could deal with the virus outbreak effectively. The government should also uphold the rule of law and democracy, he added, apparently referring to several recent scandals related to Cabinet members and law enforcement.