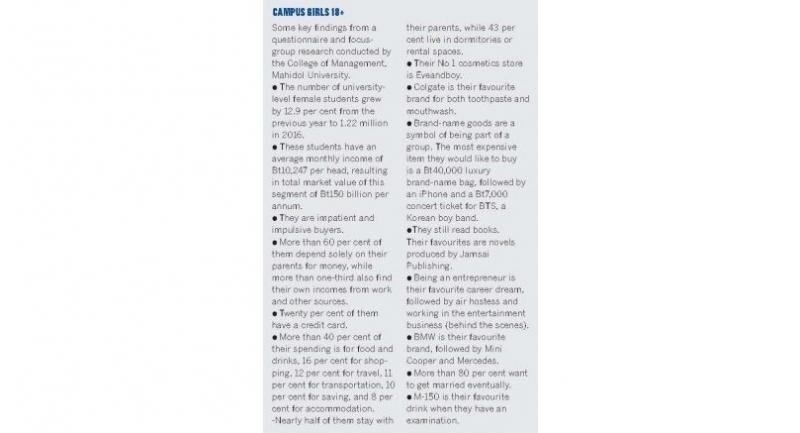 THE “CAMPUS GIRLS” market, estimated to be worth Bt150 billion, is attractive because of their “willing to pay” and “willing to share” shopping behaviour, but businesses and marketers have to learn how to win over their hearts, a conference held by the College of Management, Mahidol University (CMMU) heard on Thursday.

Nopnaree Pourrattanarunkon, co-founder and chief marketing officer of Somjai Online, a stationery store, said most “campus girls”, defined as female consumers studying for an undergraduate degree, were not price-sensitive and could make swift buying decisions.
“But you need to have a story to allure them to feeling like buying. You can’t just look like an ordinary reseller,” she said.
Realising the importance of brand perception to this demographic group, Somjai recently embarked on a rebranding scheme that included redecorating its physical stores and new packaging.
“We’ve invested in new bags. This affects our costs, as we’re in a low-margin business. But it draws [could have] a significant result because brand perception is very important to this customer group,” she said.
CMMU marketing lecturer Supannee Vadhayakorn said businesses should pay attention to this “campus girls 18+” customer group since they are impatient and impulsive in their buying decisions.
Furthermore, official statistics show the number of female students studying at universities level growing by 12.9 per cent from the previous year to 1.22 million in 2016.
And according to CMMU’s “Campus Girls’ Insight” research conducted recently, these students have an average monthly income of Bt10,247 per head, resulting in total marketing value of this segment of Bt150 billion per annum.
Based on the research, CMMU suggests that brands to pursue the eight strategies dubbed “COSMETIC”, which stands for Content, Online, Small, Multi-brand, Easy & Convenient, Testable, Influence from friends & Mum, and Confidence.
Anuphong Kuttikul, co-founder of Carnival BKK, operator of stores selling sneakers and street wear, told the conference that since consumers could also find the same shoes at other shops, Carnival had to make its customers feel that they had to buy only at Carnival stores, through making itself a trend-setter.
“By making ourselves a trend-setter, [customers] like to come to buy from us, because Carnival has already made a selection for those [items] that are trendy,” he said.
Supajet Trakarnsiriwanich, co-founder of Growth Cafe and Co, which operates a cafe and co-working space, said his firm loved the “campus girls” customer group because they were both “willing to pay” and “willing to share” when they find a good experience at his store.

Key findings from the reserach include:

-The number of female students studying at universities level growing up by 12.9 per cent from the previous year to 1.22 million in 2016.

-These students have an average monthly income of  Bt10,247 per head, resulting into a total marketing value of this segment of Bt150 billion per annum.

-They are “impatient” and “impulsive” buyers.

-More than 60 per cent of them depend their incomes solely from their parents, while more than onethird also find their own incomes from works and other sources.

-Twenty per cent of them have a credit card.

-Nearly half of them stay with their parents while 43 per cent are living in dormitories or rental spaces.

-Their No.1 cosmetic store is Eveandboy.

-Colgate are their favourite brand for both toothpaste and mouth wash.

-Brandname goods are a symbol of being part of a group. The most expensive item that like to buy is a Bt40,000 luxury brand bag, followed by an iPhone, and a Bt7,000 BTS Korean boyband concert ticket.

-They are still reading some books.The most favourite one is novels produced by Jamsai Publishing.

-Entrepreneur is their favourite career dream, followed by airhostess, and working in the entertainment business (behind the screen).

-BMW is their favourite brand, followed by Mini Coopers, and Mercedes.

-More than 80 per cent want to get married eventually.

-M150 is their favourite drink when they have an examination.