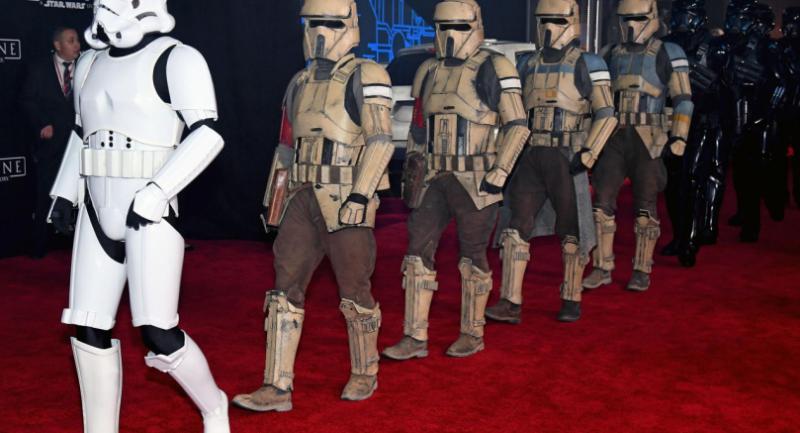 'Rogue One' premiere brings the Force back to Hollywood

The $200 million spin-off is expected to be the hottest ticket of 2016, recording the second-highest first day of domestic pre-sales ever, behind last year's "The Force Awakens."

Police cordoned off the area around the Pantages Theater in Hollywood hosting almost 3,000 guests, setting up metal detectors and deploying scores of officers and sniffer dogs.

"I feel honored to be part of this family, and by that I mean the fans, not just the filmmakers," British actor Riz Ahmed, who stars as pilot Bodhi Rook, told AFP ahead of the screening.

"They are what keep this alive. And it's them that we're all looking to, to gauge how we've done. I really feel proud of the film, and I hope they connect with it too."

Jyn -- a delinquent with a string of convictions for forgery, assault and theft -- is recruited by the Rebel Alliance for a mission to destroy a planet-sized weapon of mass destruction recently named the Death Star.

Mikkelsen told AFP it felt "surreal" to be part of the iconic saga, having grown up with the original trilogy.

"People will be surprised that we did a grittier film than the former ones, and more character driven," he said.

As well as the cast and crew, celebrities including actors Michael Douglas and Christian Bale, as well as maverick filmmaker Kevin Smith, walked the red carpet ahead of the screening.

The intergalactic tale of good versus evil, friendship, loyalty and love created a defining moment in the history of popular culture, and launched one of the biggest movie franchises ever.

"I love 'Star Wars' because it's a gateway drug, but 'Empire' is a perfect film, a top five movie of my lifetime," "Chasing Amy" and "Clerks" director Smith, 46, told AFP.

Excitement around the "Rogue One" premiere had been building for days as the environs of the Pantages were closed to traffic to make way for a huge marquee and a full size model of an X-Wing fighter, parked in the street.

Earlier in the day parody "Rogue Won: A Culture War" posters appeared at bus shelters and benches around Hollywood, featuring President-elect Donald Trump as the hero of the piece.

Earlier in the week a #DumpStarWars hashtag began trending on Twitter after one user made the claim -- strongly denied by Disney -- that the movie had been reshot to include an anti-Trump message.

The campaign appeared not to have reached scores of fans who lined up to catch a glimpse of the "Rogue One" cast, several in the outfits of their favorite characters.

"My husband is a collector. He owns 65,000 pieces. Jyn Erso is a great female character. I love that they have incorporated female characters with great leadership," said Anne Jenkins, 48, of Kansas City.

"Rogue One" is part of an attempt to revitalize the franchise since Disney bought Lucasfilm in 2012, when it was still reeling from grim reviews for the much-maligned 1999-2005 prequel trilogy.

The idea was to bring out a sequel trilogy with a movie every other year -- starting with "The Force Awakens" in 2015 -- and intersperse those releases with an "anthology trilogy" of one-off, standalone movies in the even years.

J.J. Abrams's "The Force Awakens," made $2 billion to become 2015's biggest release, the most successful Disney motion picture and the third-highest grossing movie of all time.

Pundits expect "Rogue One" to open at $130-$150 million, some way behind the $248 million debut weekend for "The Force Awakens," and end up with a final global total around $1.4 billion.

The premiere will be followed by a global rollout taking in 11 countries beginning on Wednesday before the film gets a wide US release on Friday.

"This is what the prequels should have been all along," TV host and film critic Scott Mantz told AFP after the screening.