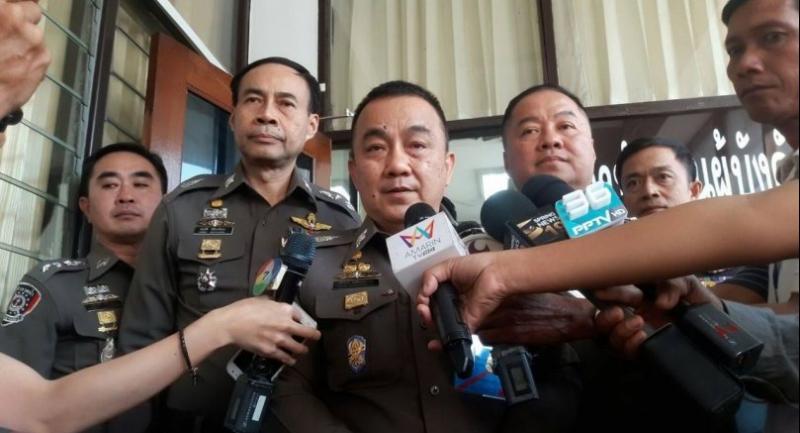 JUST A day after sacked Palace official Pol General Jumpol Manmai was brought to court for alleged forest encroachment and building on public land, his wife turned herself in to police yesterday to face the same charges.
Thanakorn Manmai, 59, arrived at the Natural Resources and Environmental Crime Division in the afternoon, where she met with a number of senior officers, including deputy national police chief Pol General Srivara Ransibrahmanakul.
Thanakorn came with relatives and was later joined by her lawyer. She appeared visibly anxious upon arrival. The media was not allowed to take her photo.
The woman has been charged along with her husband Jumpol, and three others. They are accused of encroaching on Thap Lan National Park in Nakhon Ratchasima’s Wang Nam Khiew district.

Released on bail
Thanakorn reportedly denied some of the charges against her, but allegedly made partial admissions during the police interrogation.
She was released on bail of Bt200,000 requested by police investigators.
The three other defendants had been released on bail after police investigators concluded that they were unlikely to flee. They were identified as Region 5 Police deputy commissioner Pol Maj-General Pongdej Prommijit, his wife Chanasit Pisitwanit, and her relative Manop Plodkhoksoong.
Jumpol, 66, a former deputy national police chief, was sacked by the Royal Household Bureau on Monday from his post as grand chamberlain in charge of security and special affairs. The agency said that he had committed grave misconduct and had political interests deemed detrimental to national security.
On Thursday, Jumpol surrendered to the Crime Suppression Division to face the charges of forest encroachment against him. He later confessed to all the charges relating to his alleged forest encroachment when he appeared before Nakhon Ratchasima Provincial Court, according to Srivara, who added that the defendant did not apply for temporary release.
Meanwhile, Thap Lan National Park authorities have posted a notice for forest encroachers to demolish buildings constructed illegally on forestland, national park’s chief Prawatsart Chantarathep said yesterday.
He explained that officials had exercised their administrative power in issuing the order, after defendants formally acknowledged charges against them. He said defendants still had the right to appeal against the order.
However, he also said that authorities were confident they had strong evidence to prove that the buildings were constructed in the national park, judging from their locations and readings of satellite coordinates.
In a separate case relating to a disgraced former Palace official, the Bangkok Military Court yesterday sentenced Chitpong Thongkum to five years and six months for lese majeste and four other charges including theft at a state office and violations of the Cosmetics Act. He was also fined Bt25,000.
Original punishments were reduced by half as Chitpong admitted all the charges before the court. For instance, the court reduced a five year prison sentence to two-and-a-half years for the charge of violating Article 112 of the Penal Code involving lese majeste.
Chitpong, who served in His Majesty the King’s security detail, was stripped of his military rank of air vice marshal and royal decorations in an order by the prime minister. The order, published in the Royal Gazette on February 19, accused Chitpong of stealing royal property, disclosing His Majesty’s personal health records and failing to report to duty as required.