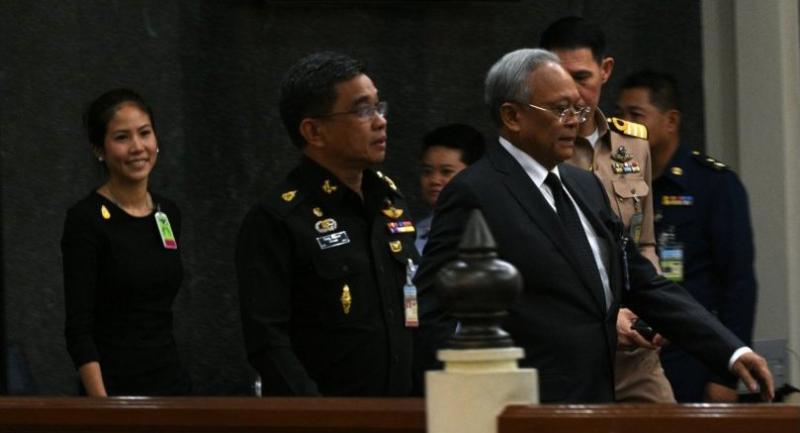 Suthep insists on reforms before poll

THE PEOPLE’S Democratic Reform Foundation (PDRF) remained firm in its stance of “reform before election”, saying it did not mind a delay in the holding of the next election.
The group admitted to being fans of junta head General Prayut Chan-o-cha and the desire to complete key reforms.
Meanwhile, Deputy Premier Prawit Wongsuwan, who heads the panel on reconciliation preparation, said he would call a meeting on Monday with the three subcommittees, as the initial stage – gathering opinions – had already been mostly completed. The PDRF was the last group it has met.
After four hours of reconciliation talks at the Defence Ministry yesterday, PDRF president Suthep Thaugsuban said: “We’ve made the point in the meeting that the masses expect the National Council for Peace and Order [NCPO] and the government led by [Prayut] to finish the reforms so the country can continue as a democracy with the monarch as the head of state.”
The former Democrat politician said people had followed the government’s work closely and found it to meet their expectations. But there were still many issues left to be tackled so people wanted the government to carry on the work, Suthep said.
Politics remained the most pressing matter needing reforms, the PDRF told the military-initiated reconciliation meeting, he said.
“Politics has to serve the people. In the past, it was [dominated by] politicians and financiers as well as interest groups. It’s never about the people,” Suthep said.
“Most importantly, political parties must be run by people who support democratic rule with the monarch as the head of state, not a republic.”
Contrary to the opinion of the red-shirt United Front for Democracy Against Dictatorship, the PDRF president said absolute power under Article 44 of the interim charter was not a problem for reform. Suthep said it as an opportunity for the junta to effectively reform the country.
He insisted that even if continuation of reform work delayed the promised road map to democracy, people would still support it.
“To my knowledge, the people are not in a hurry for election to take place. They want to see changes and reform in the country before moving forward,” he said. “The PDRF has no concerns over the NCPO staying in power so long as it works to push reforms.”
In response to a question that the PDRF’s stance made it seem as though the group was siding with the military, Suthep said it has always been “explicit” that it rooted for the military and Gen Prayut. This was never hidden, he said.
But the PDRF president said the group would accept the results of an election and not march in the streets as long as the process followed proper rules.
Suthep declined to speak on reaching an agreement as a result of the reconciliation talks. The former politician said he was not certain if everyone was on the same page when referring to such an agreement as ‘the social contract’, as Prawit has called it.
The PDRF was also represented by Satit Wongnongtoey, Akanat Promphan, Chitpas Kridakorn, Thavorn Seniem, Nattapol Teepsuwan, Chumpol Julsai, and Sakoltee Patthippayakul at the reconciliation talks.