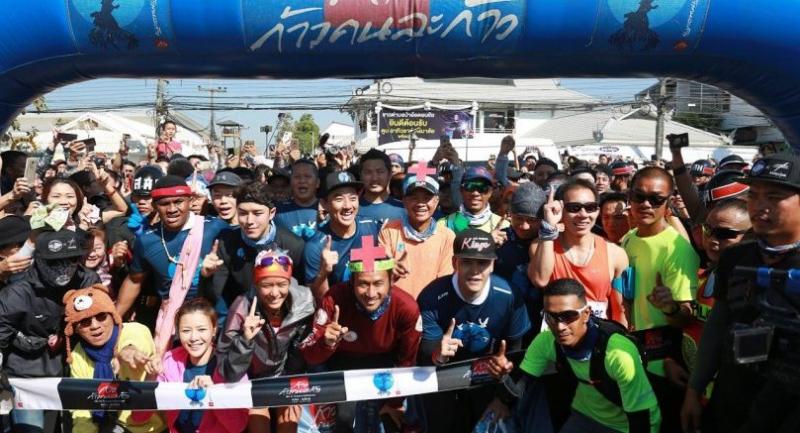 As of 2pm yesterday, donations for 11 public hospitals benefiting from Artiwara’s cross-country charity run since November 1 amounted to Bt1,000,428,009.39 – well exceeding his initial target of Bt700 million. Artiwara – who was voted in a Bangkok Poll survey as the most admirable person of the year (83.5 per cent), overwhelmingly beating Prime Minister General Prayut Chan-o-cha (11.1 per cent) – has run for 372.24 hours over 42 days covering 2,139.9 kilometres, according to the campaign’s Facebook page www.facebook.com|/kaokonlakao.
The rock star is now in Chiang Rai, inching towards the finish line in Mae Sai district just in time for Christmas. He set himself the target of running from the southernmost tip of Yala’s Betong district to Mae Sai, a distance of 2,191km, when he embarked on the campaign.
As Artiwara departed Pu Kaeng School in Chiang Rai’s Phan district at about 3am yesterday, he was joined by famous Muay Thai kickboxer Corporal Sombat “Buakaw” Banchamek along with other celebrities. He appeared to be cheerful although he had just recovered from an injury that forced him to rest for two hours in the Mae Jai district of Phayao province the previous day.
Artiwara was cheered on by local residents in winter gear who braved the chilly weather to hand him money along the way. Many gathered near bonfires to warm themselves while waiting to greet the rocker, who is still nursing a shoulder injury. His team told people he had to refrain from signing autographs in order to not aggravate the injury.
He was also warmly welcome by about 1,000 people at Wat Rong Khun, the first stop on the day’s first stage where 100 Chiang Rai Pracha Nukhro Hospital nurses and nursing students were also present to welcome him.
Outspoken national artist Chalermchai Kositpipat, who designed and built the temple with his own funds and donations, was not at the scene because he had to tend to business elsewhere, but he assigned a representative to donate about Bt1 million and a Buddha amulet to the runner.
Chiang Rai Pracha Nukhro Hospital, which is among 11 hospitals that will benefit from the donations, also saw its own staff raising Bt300,000 from among themselves and the public, deputy hospital director Prakaikaew Kakham said. She added that the hospital had also prepared a rite of Bai Sri Su Kwan to welcome Artiwara at Rai Chern Tawan in Muang Chiang Rai tomorrow.
The revered monk Phra Maha Vuthichai Vachiramethi, who has authored many books, wrote a poem titled “Wing Thudong”, or “pilgrimage running”, for Artiwara, which he will present to the singer tomorrow. The monk said he saw Artiwara’s charity run as similar to a monk’s pilgrimage, which required discipline and endurance, physical and mental stamina, and tolerance.