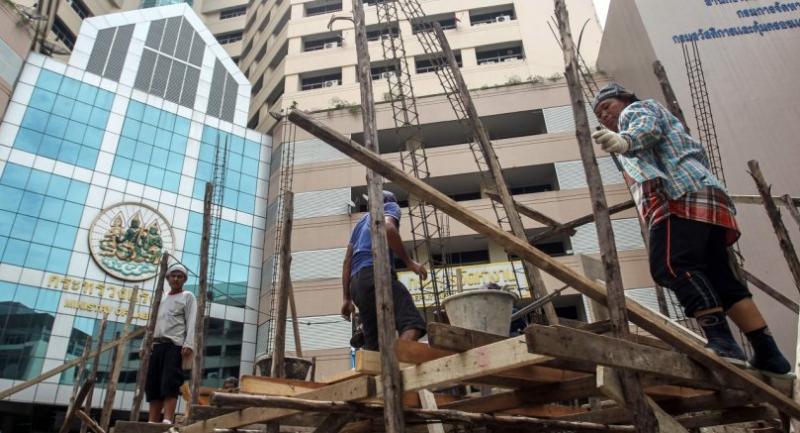 THE COMMERCE Ministry said the rise in the minimum wage rate would have very low impact on the cost of goods and could not be cited as an acceptable reason to increase product prices.

Despite arguments made by some business representatives that the wage increase would impact their costs of production, Commerce Minister Sontirat Sontijirawong yesterday said that there will be a very small impact on the cost of production, of goods or of exporting.
An assessment by the ministry found that the higher minimum wage would increase the cost of a finished good by only 0.05 per cent, the cost in the production sector by only 0.07 per cent and the cost of exported goods by 0.022 per cent.
“From our study on the impacts of the wage raise, we found that the average minimum wage of the country has increased to Bt315.9 or a 3.4 per cent increase from the earlier rate. Our study also finds that this rate would cause only a maximum 0.1 per cent increase in the cost of goods production,” Sontirat said.
“Therefore, sellers cannot use this wage hike as a reason to increase the price of their products.”
The Commerce Ministry will meet with representatives of the business sectors next week to review the study’s findings and hear their feedback, he added.
Sontirat suggested that people report any hike in the costs of products or services by calling the Internal Trade Department at 1569 or contacting provincial Commerce offices nation-wide.
Officers will closely monitor the price of goods in the market to ensure that consumers are not taken advantage of.
Labour Ministry permanent secretary Jarin Chakkaphark said that the authorities have planned well in preparation for the wage hike and would provide relief measures for business owners by issuing a special income tax deduction and lowering the co-payment for Social Security by one per cent for 12 months.
Meanwhile, both business owners and workers in Rayong expressed concern about the pay rise. Worker groups said the raise was too little to improve their standard of living, while business representatives raised the spectre of the survival of SMEs due to their increased expenses.
Rayong is one of three provinces to get the highest bump up in the minimum wage at Bt330, alongside Chonburi and Phuket.
Rayong Chamber of Commerce chairman Noppadon Tangcharoen said that increase has huge negative impacts for SMEs, because business owners would have to swallow the increased expense even though small businesses cannot tolerate an increased financial burden. That could force some businesses to close their doors, said Noppadon.
“I have talked with many business owners and all of them expressed their worries that if their business expenses continue to rise, they may have to close down their business, especially during this time of economic downturn,” Noppadon said.
“We want the government to reconsider this policy. And they should comprehensively consider the impacts on all stakeholders, because if the businesses close down the workers will lose their jobs as well.”
Kittisak Hakkhuntod, a construction worker in Rayong, said that he will get little benefit from the pay rise, as a rate of Bt330 per day was too little to pay for the high cost of living in Rayong and would leave most workers unable to save.
“I would like the government to instead control the price of products we use in daily life in order to keep the cost of living low, and ensure that the poor people can get necessary goods at a reasonable price,” Kittisak said.