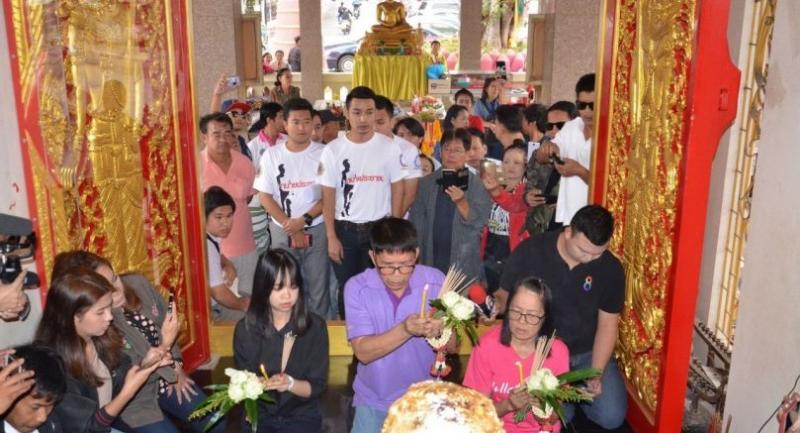 Retired cop vows at shrine that lottery millions belong to him

Retired police lieutenant Charoon Wimul, who is in a dispute with a schoolteacher over a multi-million-baht lottery jackpot, performed a vow on Sunday in front of Kanchanaburi’s sacred City Pillar Shrine swearing that he was the one telling the truth in the matter.

He also asked the supernatural entities to severely punish “the liars”.
Charoon, accompanied by his wife Lawan and their daughter, read the vow loudly as his lawyer, Sittra Biabungkerd, and reporters observed the 10-minute ritual starting at 10am.

According to religious belief, if he has done as accused – that is, falsely claimed the winning lottery tickets to be his – he will be severely punished in various unfortunate ways. Otherwise, he will be protected and blessed with success.
Many people also showed up at the shrine to give the family flowers and support.
Charoon challenged the teacher, Preecha Kraikruan, Preecha’s witnesses and police to make the same pledge. However, only the province’s major lottery vendor, Pananchaya Sukpol, who was Preecha’s key witness, showed up, after Charoon had already finished his ritual.
She came with copies of a vow requiring the supernatural entities to severely punish the wrongdoer in seven to nine days. She asked Charoon to read this out as his own vow – which he did willingly – before she made the same vow.
Both Charoon and Pananchaya gave interviews to the media, defending their own sincerity. Local residents said they would wait for the court to provide justice in this case while the vow made to the sacred City Pillar Shrine would give a result “depending on each person’s karma”.
Charoon and Preecha have been embroiled for several months in a high-profile dispute about the real ownership of lottery tickets that won Bt30 million in the November 1 draw.

Preecha complained to police that he had bought and lost five tickets in October that had later won the jackpot, which was then collected by another person. Charoon, who was identified in a police investigation, insisted that he bought the tickets and collected the prize accordingly.
Despite a previous DNA test result showing that Charoon handled the tickets, Provincial Police Region 7 chief Pol Lt-General Kittipong Ngaomuk announced last Wednesday that Preecha was the tickets’ owner and Charoon would be charged with embezzlement and receiving stolen items.
Police said that witnesses saw Charoon picking up lottery tickets from the ground. Preecha claimed that this was captured by a security camera, but police said late last week that they couldn’t find such a camera in the market area.