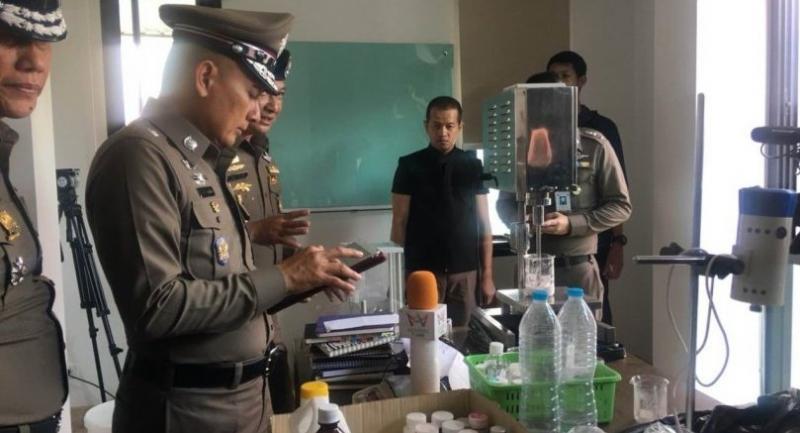 POLICE PLAN to summons for questioning about 15 celebrities, stars and Internet idols hired to be presenters of well-known food-supplement brands whose company is facing allegations of operating without a proper licence.

A source said the move had been decided after police found video clips and photos of those presenters during an investigation into a claim that the company, Magic Skin, has no authorised use of Food and Drug Administration (FDA) marks and that it was producing substandard products.
Tourist police commander Pol Maj-General Angkul Klaiklueng said yesterday that arrest warrants had been issued for deceitful action by eight suspects.
Six were now in police custody and the two others were still on the run, although they were expected to be arrested soon, he added.
During a raid at house in a housing estate on Ram-tra Road on Saturday led by Deputy national police chief Pol General Wirachai Songmettha, police found a variety of items relating to the production of fake cosmetics and food supplement products, such as fake labels and other fake products.
Also seized from the house were Bt19 million in cash, 53 gold rings and one luxury car, a Mercedes. The values of the items seized was Bt21 million.
Angkul yesterday led a raid at the firm’s factory in Pathum Thani’s Klong Luang district and confiscated what officers believed to be items connected with the allegations.
The raid was made after a detained suspect told police that the products had been produced at the factory.
Reporters were yesterday shown more than 100 boxes of the seized items.
Angkul said all the products were illegal as the firm has not yet obtained any permit from the FDA.
All the products were handmade and sub-standard, having been made without following any acceptable formula. “The producers of the cosmetics and supplementary food decided by themselves the volume of the ingredients. These were dangerous to consumers,” he said.
He also revealed that fertilisers were found in the factory and that police would check whether the factory had a permit to produce fertiliser or not.
The Saturday raids were also conducted in other places in Bangkok, Nakhon Ratchasima and Chon Buri provinces.
The police investigation found that the suspects had sold products with the trademarks Apple Slim, Snow Milk, Slim Milk, Magic Skin, Fern, Shinoshi, Mezzo and Treechada. Each of these carried either a fake FDA certificate or the wrong type of FDA certificate, Angkul said.
The raid and investigation into the company and the factory were the results of complaints by several victims who claimed they had been producing substandard items and fake cosmetics.