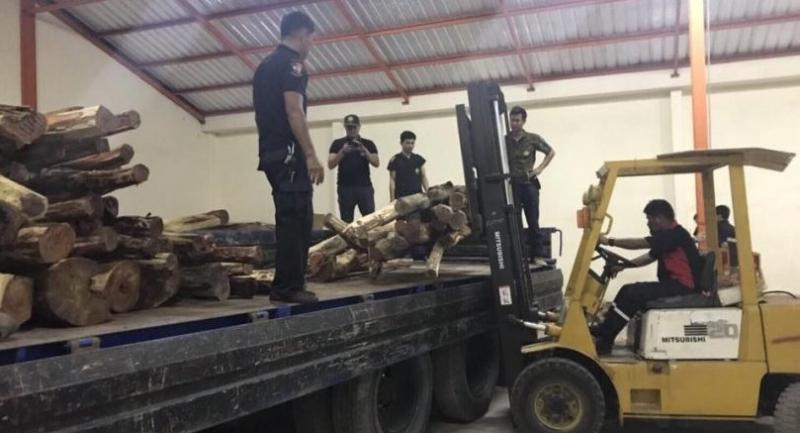 A joint task force of forest crime suppression and police raided a warehouse in the Lat Krabang area on Wednesday night, where illegal logs of Phayung wood worth an estimated Bt6 million were found.

The Phaya Prai forest crime suppression task force under the Forest Protecting Operation Centre and police from the Natural and Environmental Crime Suppression Police Division, raided the warehouse after tracking their activities using high technology which helped identify the location.
In the warehouse, the task force found processed Phayung logs ready for shipment, while outside the warehouse a number of logs were found loaded in a truck.
Five people were arrested at the scene.
Cheewapap Cheewatham, the Phyak Prai chief, said according to evidence seized at the scene, including purchase orders, the suspected illegal loggers had been operating for some time, and were attempting to hoodwink officials by shifting their stocks from one warehouse to another.
The latest raid and arrests are part of years-long efforts to crack down on illegal logging, suspected to be a transnational activity as some foreigners were also found involved.
The task force in recent years has frequently confronted transnational logging gangs, among whom phayung and tamalan wood are in particularly high demand.
Earlier this month, they intercepted a truck transporting illegal tamalan logs in Samut Prakan province, after tracking it from Nan province in the North. Some sawmills in Ayutthaya province were also raided.
Logs about to be transported along the Mekong River were earlier intercepted in Chiang Rai and forestry officials found to be involved were sacked.