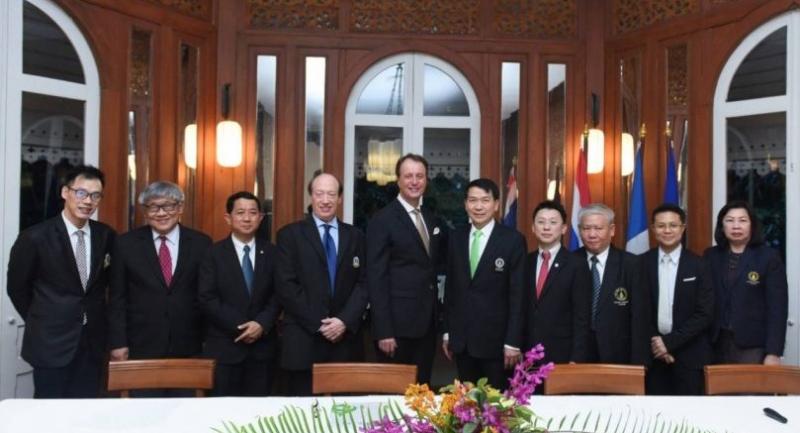 THAI and French physician-scientists yesterday announced a method for correcting thalassemia, a blood disorder, by gene therapy – a world first in medicine.

The team of researchers, led by globally renowned gene therapist Professor Dr Philippe Leboulch of the University of Paris and Harvard Medical School, revealed that this new technique to cure thalassemia is expected be available to the general public in France by next year. Patients in Thailand will have to wait a little longer, as gene therapy for treating thalassemia is still in the clinical trial process.
The results of the trial on 12 patients by a group of Thai and French scientists were published in the April 19 issue of The New England Journal of Medicine.
Beta-thalassemia has been especially frequent in Thailand and Southeast Asia, and approximately 3,000 babies are born each year in Thailand with a severe form of beta-thalassemia that requires life-long, monthly transfusions. Even with this treatment, complications frequently occur, resulting in a decreased life expectancy. Beta-thalassemia imposes an enormous financial burden on affected nations.

After Leboulch published the proof of principle of the efficacy of the treatment on single beta-thalassemia and sickle cell patients, he collaborated with Dr Suradej Hongeng and Dr Suthat Fucharoen from Mahidol University in major worldwide phase-two trials to evaluate the gene therapy approach, called LentiGlobin, in a large cohort of patients.
The therapeutic vector integrates permanently a corrective normal beta-globin gene into the patients’ blood stem cells, after the defective cells have been first eliminated. Twelve patients with severe beta+- or betaE/beta0- thalassemia – the most common in Thailand – are now free of having transfusions after they were injected with an effective dose of cells that had received the vector, Leboulch said.

He revealed that the result of trials on humans was very promising, as all 12 thalassemia patients had been cured. It is expected that the therapeutic effect will last for the rest of their lives. Nevertheless, he stated that the safety profile of LentiGlobin, which remains under investigation, has been consistent with myeloablative conditioning with the chemotherapy agent busulfan.
Leboulch said that European countries would be the first to adopt this new thalassemia treatment, with French people having access by next year.
The cost for curing thalassemia with this new technique was not yet finalised, but he insisted that government health policy would play a major role in keeping it affordable for the general public.

“We are delighted that our patients are doing fantastic, no longer requiring blood transfusions, whereas they were previously transfused monthly since early childhood. They go to school or work, play sports, and now live a normal life,” said Dr Suradej.
He pointed out that existing treatments for thalassemia are expensive, have many side effects, and cast a heavy burden on our health system. The cost of constantly giving blood transfusions to one person for 30 years is up to Bt10 million, and it is estimated that 40 per cent of the stock at Thai Red Cross’s blood bank is used for thalassemia patients.
The only curative treatment currently available is transplantation of donor blood stem cells from a healthy, compatible donor. However, only about 25 per cent of patients can find a suitable donor.