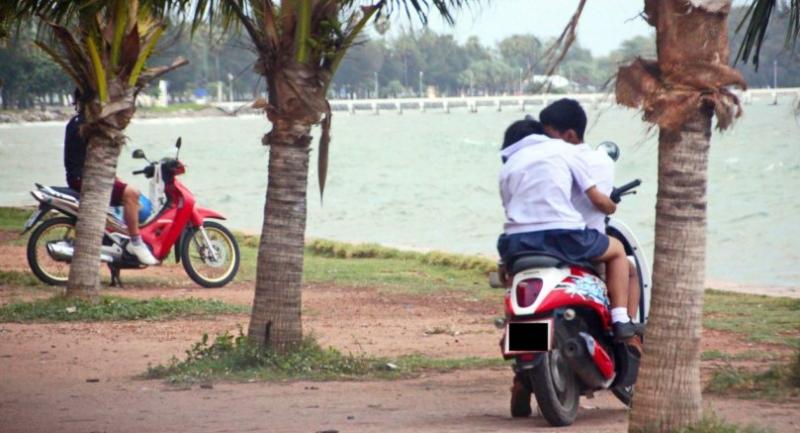 The new regulations, which will be implemented after being published in the Royal Gazette, is a revamp of the 2005 regulation on students’ conduct that warned students against public displays of affection and causing a public nuisance at night.
The new regulation now also forbids public assembly likely to disturb order or go against morality, inappropriate acts of affection and obscenity in private and public places, and causing a nuisance.
Education Ministry spokesperson Chalam Attatham said the 2005 regulation had to be revised in line with modern society and to close some loopholes.
It aims to better protect students and promote acts that are appropriate and socially responsible. He said that though student behaviour seems to be improving, with fewer cases of them engaging in brawls, “[the new regulations] will give schools and authorities a tool to oversee their students”.
Meanwhile, Montri Sintawichai, director of the Child Protection Foundation, said: “What students need is not punishment, they need help.
“If a student is at risk of or is engaged in acts of sexual intimacy, apart from alerting the school or parents, we will also need good measures to help [them] continue their education and prevent such acts in the future,” he said.
Montri said a public assembly that may cause indecency and public nuisance is too broadly defined, as it could include singing or playing the guitar loudly.
Warat Phrueksakulnan, the director of Bureau of Scout Movement, Red Cross Youth and Student Affairs, said in an interview with Kom Chad Luek, that kissing the cheeks of a member of the opposite sex or embracing them is “inappropriate”.
Warat added that authorities overseeing student conduct should deter students from such acts by conducting random patrols at risk-prone areas every month and keeping a close watch during events such as Valentine’s Day.
Some students, however, find the regulations too intrusive.
Piyamanida Tumcha from Chulalongkorn University said the regulation infringed on her rights. “What if I like skateboarding, but people in my neighbourhood say it causes a public annoyance, am I banned from it?” she said.
She also questioned how the regulation could be enforced effectively, especially the ban on physical affection in public and private places. “If it is done in private, I wonder how it harms the public? Also, if it is done in private places, how can they know and enforce the regulation?” she asked.