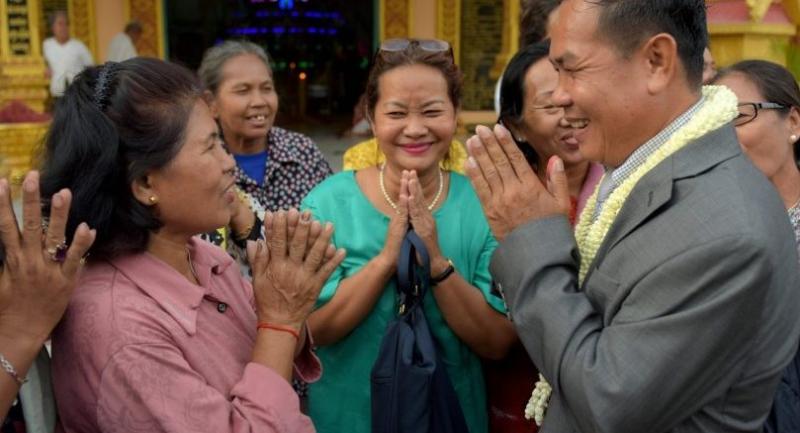 An outspoken Cambodian opposition lawmaker was pardoned by royal decree and released on Saturday, the first member of a now-dissolved political party to be freed a month after strongman premier Hun Sen won a virtually uncontested election.

The lead-up to the July 29 poll -- which Western democracies have slammed -- was marked by a clampdown on activists, journalists and the opposition Cambodia National Rescue Party (CNRP), paving a clear path for the authoritarian Hun Sen to extend his 33-year rule of Cambodia by another five years.

Released on Saturday was Um Sam An, a dual Cambodian-US national sentenced to two and a half years in prison in late 2016 over his criticism of Hun Sen's government for using contested maps as a guideline to demarcating the border with Vietnam.

The royal pardon from King Norodom Sihamoni said the 40-year-old lawmaker had been convicted for "inciting crime and racism" with his actions.

The decree did not provide a reason for his early release.

The CNRP had campaigned on the sensitive issue of border demarcation between Cambodia and Vietnam in the previous election, causing critics to question some of the inflammatory rhetoric used by lawmakers.

In an interview with government-aligned media, Um Sam An said his newfound freedom was a chance to "reconcile the nation".

"Regardless of opposition party or the ruling party, we can love and work together to...protect our border," he said in an interview broadcast on Facebook Live.

He added that 14 more lawmakers remain behind bars in Prey Sar prison, where he was jailed, while many others -- like CNRP head Kem Sokha -- are scattered in provinces across the country.

More than half the opposition party fled Cambodia last year in fear of being imprisoned under trumped up charges.

On Thursday, Hun Sen said he plans to pardon 12 more who had written him apology letters, but warned that the process would be "put on hold" if anyone comments that he was under pressure from the international community.